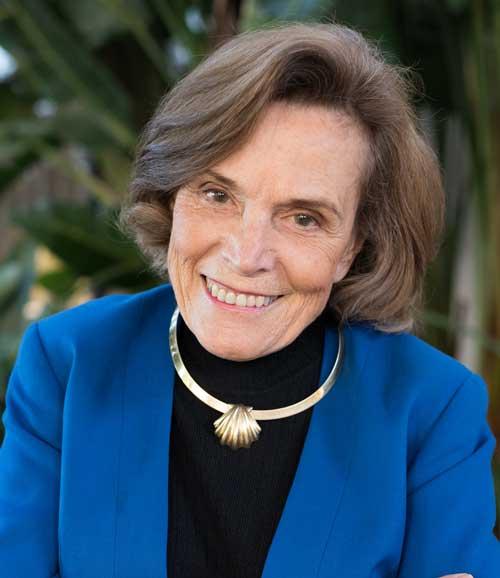 When Sylvia A. Earle began studying the ocean in the 1950s, the underwater world was just starting to open up to marine scientists. It was, however, a world where women researchers were an uncommon sight.

Over six decades, Earle broke through technological and social boundaries as she ascended to the top of her field and dived to previously unfathomed depths. Her career as a renowned oceanographer, explorer, author, and lecturer has earned her 26 honorary degrees and more than 100 national and international honors. She has been named a Living Legend by the Library of Congress and was Time magazine’s first Hero for the Planet.

Her list of accolades now includes the 2015 Distinguished Alumni Award from The Graduate School, which recognizes graduates of Duke Ph.D. programs who have distinguished themselves in service to their fields of endeavor, to Duke, and to society in general. Earle, who received an M.S. (1956) and a Ph.D. (1966) in botany from Duke, will be honored during the school’s Ph.D. hooding ceremony on May 9. [See the dean's conversation with Earle]

Earle is currently an Explorer-in-Residence at the National Geographic Society. A vocal advocate for marine exploration and conservation, she founded and chairs the nonprofit Sylvia Earle Alliance and the Mission Blue initiative, which focus on developing a global network of protected areas in the ocean to safeguard the living systems that are crucial to global processes such as generating oxygen and maintaining biodiversity.

Earle, who still dives, has led more than 100 expeditions and logged more than 7,000 hours underwater. Among her many exploits, she 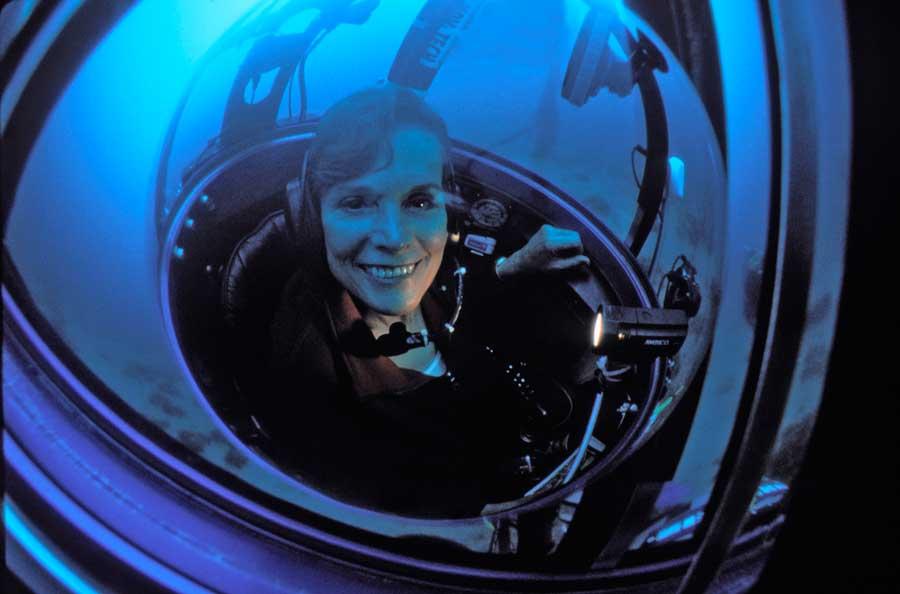 Sylvia A. Earle in a one-person submersible

Born in Gibbstown, New Jersey, Earle spent her teenage years in Dunedin, Florida, where the Gulf of Mexico served as her backyard. She received a B.S. from Florida State at age 19 and a master’s from Duke at 20. She then spent the next decade juggling school, research expeditions, and children, earning her Ph.D. in botany from Duke in 1966.

While Earle was studying at Duke in 1953, Jacques Cousteau’s Aqua-Lung began to reach the U.S. market, and she became one of the first marine scientists to use scuba equipment.

Her drive to dive never stopped. In 1979 near Oahu, Hawaii, she set the record for the deepest untethered dive, descending to 1,250 feet in a Jim suit and planting an American flag on the ocean floor. That feat earned her the moniker “Her Deepness.”

Earle later married one of the designers of the suit she wore for that record-setting dive. Together they developed Deep Rover, a submersible capable of descending to 3,281 feet. In 1986, Earle reached that depth in her creation, and it remains the deepest solo dive by a woman.

In 1992, Earle started a marine technology company, Deep Ocean Exploration and Research, which developed the manipulator arm for and tested parts of the submersible that James Cameron used to reach the deepest point on Earth in 2012. 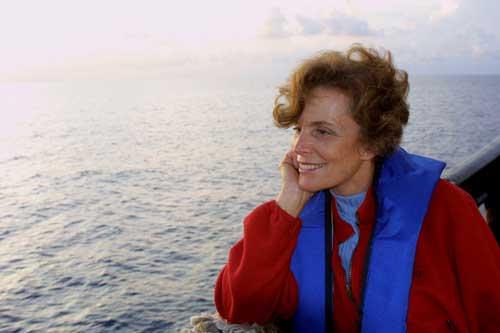 Sylvia A. Earle looks out over the Gulf of Mexico, her playground during her teenage years.

At the same time she was breaking diving records, Earle was also breaking through gender barriers. While in graduate school, she was once denied a teaching assistantship despite being the most qualified candidate because, she was told, those appointments needed to go to men, who would actually use their education, whereas women were just going to get married and have kids.

In 1964, Earle was the only woman on her first expedition, and women on research voyages were such a rare sight that a newspaper headline read “Sylvia Sails Away with 70 Men, but She Expects No Problems.”

In 1969, Earle applied to be part of the Tektite project, which involved teams of scientists living underwater for two weeks off the U.S. Virgin Islands. She had logged more hours underwater than any other applicant but was rejected because, she said, project leaders were prudish about men and women living together underwater.

Her qualifications, however, were too strong to ignore, and she was chosen to lead an all-female team—the first team of female aquanauts—for the Tektite II project in 1970. The scientists, dubbed “aqua-babes” by the media, emerged from their two-week stay underwater as instant celebrities.

As the spotlight around her grew, Earle began to point it at the need for ocean exploration and conservation. She has authored more than 200 scientific, technical, and popular publications, including 13 books; lectured in more than 80 countries; and appeared in hundreds of radio and television productions. A 2014 documentary, Mission Blue, tells the story of her career, a career that has made her, in the words of former vice president Al Gore, “the face of marine biology.”

A Conversation with Sylvia Earle