On August 23, new Duke President Vincent E. Price welcomed the new students at his first Graduate and Professional Convocation, which was held in Duke Chapel.

"You will find, as recent events and issues surrounding this very chapel illustrate, that you are not isolated from the cares, needs, demands, and controversies from our nation and world," Price said. "Instead, you're called upon to engage in deliberative and sometimes very difficult conversations about history, about our present, and most importantly, about the course of our futures together."

"However," he added, "the burden of that abuse should not be borne alone by vulnerable racial, religious or other groups. All too often they are the ones who suffer from bigoted and hateful speech. So let us also commit that we will speak up to defend those who bear the unequal burdens of offensive speech. We will use our own good speech to oppose and dispel bad speech." (See the transcript of his speech)

Thank you Paula. How kind of you. What an honor for me to stand before you in my final, 11th year as the dean of Duke Law School. And what a privilege to welcome President Price to the community of graduate and professional scholars and students at Duke.

In honor of President Price, I take a topic that I hope will resonate with him and his scholarly work in communications. My topic is “Speaking, Listening and the Rule of Law.”

After all is said and done, speaking and listening are what we do in a University, in one way or another, whether digitally, face to face, in real time or across the centuries in our written work. We speak and listen in the classroom, in the lab, in the field, and in the library. For all of this speaking and listening, we spend comparatively little time considering how well we do these two fundamental activities, fundamental to our training, our efficacy, and our community.

My great aunt Louise said that she only needed two books because by the time she had read one, she had forgotten the other. The same has been true for me when it comes to jokes. I only have two. I will tell you one of them that seems to fit the occasion. Sometimes humor opens up our hearts and minds to serious reflection.

A religious young man joined a Cistercian monastery located in the countryside. The Abbot informed him that every 10 years he would be permitted to speak two words, and two words only. Otherwise, he must strictly observe a vow of silence. The young monk nodded his agreement. 10 years later he was brought to the Abbot on his anniversary. The Abbot said, “You have been here 10 years working and praying.” Do you have two words? The monk replied: “hard bed.” The monk then left and resumed his chores. 10 years later, no longer so young, he returned to the Abbot. The Abbot congratulated him on his anniversary and invited him to speak. “Bad food.” Again, 10 years passed. The monk appeared. The now elderly Abbot greeted him. “What do you have to say?” The monk replied, “I quit.” “Well,” said the Abbot, “I’m not surprised. All you have done since you got here is complain!”

There is one takeaway from this joke for my purposes here today: A University is not and should not be a Cistercian monastery. I suspect you knew that already! Although the monk chose his two words well, it is hard to convey much information, enlightenment, or even offense with just two words every 10 years. By contrast, a University is a very noisy place and by design. Much as we might like to limit some of our members to two words, we never do. We revel in and celebrate the cacophony of many voices, and the collision of ideas and beliefs. There are few or no intervals of repose.

Where we all agree, there is little to say. This is one principal reason why we so value diversity in a University, because we want the debate, the collision of ideas, the friction that can be so productive. This is how we add to the sum of human understanding.

This faith in free expression, what we call academic freedom, is paralleled in our time by the development of the classical liberal case for free speech under the First Amendment of the Constitution.

The development of First Amendment protections during and following the World Wars and now into our own time is one of the great jurisprudential achievements of the courts in the past almost 100 years. It is a central part of what we mean by the rule of law.

The liberal case began after the First World War in Justice Holmes’ opinions, particularly his dissent in 1919 in Abrams v. United States. Abrams had been prosecuted under the Espionage Act for opposing US military actions. Justice Holmes set out the theory of free speech that is still widely accepted today. He said that when we “realize that time has upset many fighting faiths,” we come to see “that the ultimate good desired is better reached by free trade in ideas – that the best test of truth is the power of the thought to get itself accepted in the competition of the market.” And then he warned “we should be eternally vigilant against attempts to check the expression of opinions that we loathe.”

Holmes did not say all ideas are equally good, but that more and better speech, not censorship, is the proper way to separate the true from the false, and the good from the bad.

Following Justice Holmes, the courts have steadily expanded the depth and breadth of the conception of freedom of speech. In 1943, in West Virginia v. Barnette, reversing an earlier decision, the Supreme Court ruled in favor of children who on religious grounds refused to salute the flag or say the pledge of allegiance. Justice Jackson wrote that “If there is any fixed star in our constitutional constellation, it is that no official, high or petty, can prescribe what shall be orthodox in politics, nationalism, religion, or other matters of opinion.” And the same is true at a University, of course. None of the “high and petty” University officials you see before you want to or ever should prescribe orthodoxy. And this is one very good reason why Universities so rarely speak in an institutional voice, on the issues of our time, as if there were only one point of view within the University itself.

In more recent times we see the courts acting to protect speakers who address matters of public concern in a variety of settings. In case after case, the Supreme Court has extended the principles of the Holmes dissent. These cases are highly relevant to what is happening today on our streets and in our Universities. This is not our first rodeo. In 1977, when the Nazi Party of America sought a permit to march in the City of Skokie, Illinois, a place where many Jewish families and holocaust survivors had settled, the Court ruled that the permit must issue. This is why some 30 years later white supremacists and anti-semites are permitted to march again in Charlottesville and elsewhere.

I would note, however, that threatening and intimidating conduct are not protected speech, but bad behavior that can be prohibited and prosecuted.

In 2011 in Snyder v. Phelps the Court protected a religious group whose form of protest is to show up with deeply offensive signs at the funerals of soldiers killed in the line of duty in our wars in the Middle East. Acknowledging the pain caused by this speech to the families and mourners, the Chief Justice wrote “we cannot react to that pain by punishing the speaker. As a Nation, we have chosen a different course – to protect even hurtful speech on public issues to ensure that we do not stifle public debate.”

This is what the rule of law looks like when it comes to speech. It is an approach that has worked reasonably well for nearly 100 years in some very tough times. Those who would abandon the classical liberal formulation should have very good reasons for doing so.

Yet one senses that the Universities may be weakening in their commitment to academic freedom and the First Amendment without very good reasons. We see the basic premises of academic freedom under attack in so many places and across the spectrum. One University disciplines a faculty member for criticizing the National Rifle Association while another disciplines students for criticizing affirmative action. Invited speakers are intimidated or shouted down.

Surveys suggest that many undergraduates, perhaps even a majority, subscribe to the view that offensive speech by students and faculty should be punished, particularly if the subject matter is race, gender, sexuality or other areas of controversy and concern within the society.

These events of the past few years show the dangers when Universities begin to censor and punish based on content. Therein lies the path to coercion, homogeneity, timidity, and mediocrity.

I think that we are up to the challenges posed by the diversity of views we otherwise cherish and welcome.

Let us commit that on this campus everyone can say their two words, their two cents; here we will protect academic freedom and free speech even knowing that some will abuse that freedom. However, the burden of that abuse should not be borne alone by vulnerable racial, religious or other groups. All too often they are the ones who suffer from bigoted and hateful speech. So let us also commit that we will speak up to defend those who bear the unequal burdens of offensive speech. We will use our own good speech to oppose and dispel bad speech.

If we do this well, we will look back on this period with pride. We will have secured the blessings of liberty on our own campus. We cannot be a great University otherwise.

There is much more to say about free speech and the rule of law. But I have gone well past my two words and I have not said anything yet about listening, perhaps the most important skill of a serious scholar and a good person. In this beautiful chapel made for listening and contemplation, we should end on a hopeful note. All is not about argument and strife. There is also the magic and the mystery if we can only remember to listen for it.

As the great writer of the environmental movement, Aldo Leopold, expressed it: “[T]here is … music in [the] hills, by no means audible to all. To hear even a few notes of it you must first live here for a long time, and you must know the speech of hills and rivers. Then on a still night . . . sit quietly and listen for a wolf to howl, and think hard of everything you have seen and tried to understand. Then you may hear it – a vast pulsing harmony – its score inscribed on a thousand hills, its notes the lives and deaths of plants and animals, its rhythms spanning the seconds and the centuries.”

There is also a vast pulsing harmony in a University – its score inscribed on a thousand minds and hearts, its notes the lives and deaths, the speaking and the listening, of legions of teachers and students, its rhythms spanning the seconds and the centuries, its richness the diversity of voices and themes, its tempo driven by the shared yearning for truth and beauty.

It’s coming from you.

May it always be so. 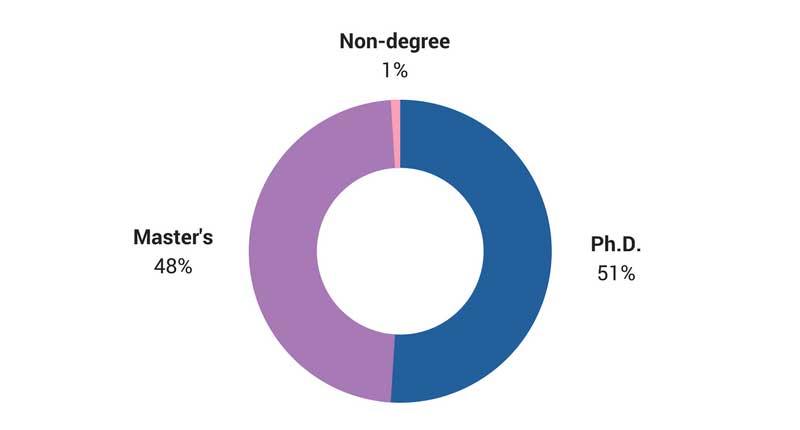