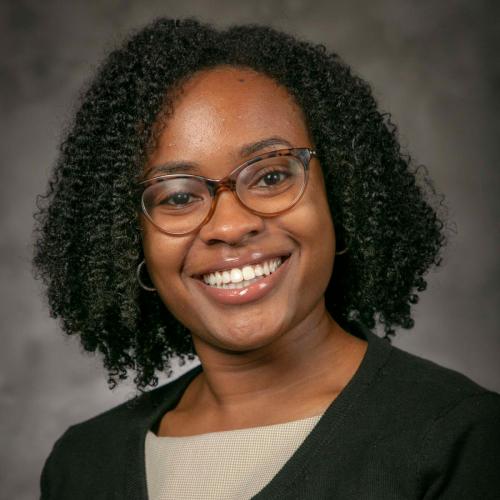 Briana Davis, a Ph.D. student in molecular genetics and microbiology, has been named the recipient of the Samuel DuBois Cook Society’s Graduate Student Award, which recognizes a Duke graduate or professional student who has helped to improve relations among people of all backgrounds at the university and beyond.

The Cook Award recipients will be honored at a ceremony on February 22. The Samuel DuBois Cook Society was founded in spring 1997 to honor the late Duke professor who was the first African American professor to hold a regular faculty appointment at a predominantly white college or university in the South. The society recognizes members of the Duke community whose work or academic pursuits reflect the objectives to which Cook dedicated his professional life.

Davis is pursuing her research under the guidance of John Rawls, using zebrafish as a model system to understand host-microbe interactions in intestinal epithelial cells. She is a scholar in the Biosciences Collaborative for Research Engagement Program and a member of the Alexander Bouchet Society, a group that works to strengthen the efforts of underrepresented graduate students in achieving their career goals in science research. She is also a former participant in The Graduate School’s Duke Summer Research Opportunity Program.

Graduate School Assistant Deans Melissa Bostrom and J. Alan Kendrick nominated Davis for the award, praising her leadership in the development and implementation of the inaugural Science Center Investigation and Professionalism Training (SCRIPT) collaboration between Duke and North Carolina Central University, where Davis earned her bachelor’s in biology.

“As an alumna of NCCU and a current Duke graduate student, Briana perceived herself as uniquely positioned to start the foundation between the two institutions,” Bostrom and Kendrick wrote in their nomination.

The program, which was held in summer 2021, aimed to provide more mentorship and exposure to scientific careers for undergraduates at NCCU. It provided four major training workshops led by NCCU and Duke faculty, panels featuring guests from different STEM career paths, and a networking session with the panelists. The event received very positive reviews from the participants.

“As a leader on this initiative, Briana recognized that building mutual respect and trust among partners required team efforts at both universities to recognize their respective traditions,” Bostrom and Kendrick wrote. “A lesson that we learn from Briana’s experience is that leading and fostering meaningful relationships with others is not only about bringing your ideas to the table, but also a willingness to adapt those ideas to uplift the common goal.”