From Science to Basketball, Grad Students and Alumni Find Their Voice in Podcasting 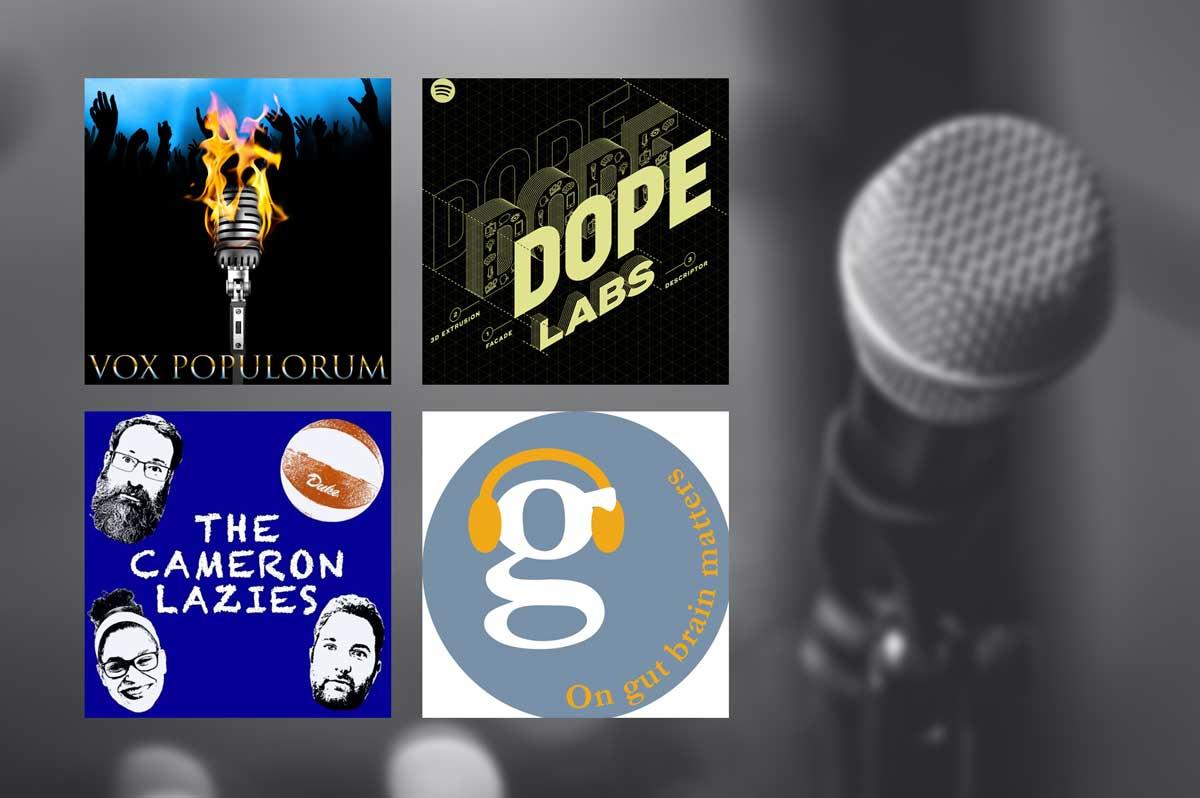 For some of The Graduate School’s current and former students, adding the title of podcaster to their already impressive credentials has been a way to dive deeper into their respective fields of study, connect with professionals, or learn a new skill. We take a look at four podcasts that several members of The Graduate School community have helped to create, produce, and host.

After being challenged by his Ph.D. mentor to expand the Gastronauts Network, an organization committed to exploring topics related to gut-brain matters, Peter Weng wanted to help further the mission by sharing the “scientist behind the science” through a podcast. The M.D.-Ph.D. student enlisted the help of Meredith Schmehl, a Ph.D. student in neurobiology who has an extensive history with scientific communication. The duo launched the first episode of The Gastronauts Podcast in July of 2019 and have produced 14 episodes so far.

The topics of the podcast vary, covering “everything from what happens to bacteria in outer space to what it’s like to start a company,” Schmehl said.

“We interview expert scientists in the fields of gastroenterology, neurobiology, and anything in-between,” he said. “Our discussions are centered around their research, career path and philosophies on life.”

For the two self-taught podcasters, the experience has presented a few bumps in the road, like determining how to best translate scientific stories or complex experiments into an audio-only format, but doing the podcast has allowed them to explore other topics and gain new skills.

“I’d tell myself to take the time to enjoy learning about a new topic,” Schmehl said. “My research is in an area far from the gut-brain connection, and editing the podcast has been a valuable opportunity for me to learn about a new field.”

For recent English Ph.D. graduates Katya Gorecki and Hannah Lee Rogers, being co-hosts of the podcast Vox Populorum can only be described as an “academic barroom conversation with drinking and swearing.”

“Basically, the idea is to present conversations on popular culture and current events by academics, industry professionals, and general culture enthusiasts in an accessible and hopefully entertaining way,” said Gorecki, who graduated last spring.

Over the course of more than 120 episodes, the show has explored subjects from comic book superhero costumes to police brutality. The podcast grew from the conversations and debates that Gorecki and her eventual co-hosts had. After being invited on the show as a guest for an episode, Rogers was brought on to complete the team, which also includes Duquesne Ph.D. candidate Christopher Maverick and writer Wayne Wise.

The podcast has allowed Gorecki and Rogers, who have different areas of study, to dive into new topics that have ultimately influenced their own professional research.

“All of the co-hosts have different backgrounds and knowledge bases, as do our guests, and these conversations have enabled us to create a different kind of community and consider our areas of scholarly interest in new ways,” said Rogers, who completed her Ph.D. last spring. “For instance, I would not have written my dissertation in the same way, nor performed research on games set in the 19th century, without this podcast.”

For many Cameron Crazies, the fanaticism encompasses watching games and talking about players or coaches. For Ariana Eily (Ph.D.’19 Biology), however, supporting the team in the usual way wasn’t quite doing it, so she and fellow fans Shane Ryan and Aaron Kirschenfeld, also Duke graduates, started a podcast centered around the phenomenon that is Duke basketball.

“The thing that got us recording podcasts was me and my friend Shane’s regular dialogue about sports—especially Duke basketball,” Eily said. “We’re both sports fanatics—he covers sports as a reporter and author, among other things; I’ve played and been an avid fan for life. We were sitting and chatting one day after watching some NBA ball and he turned to me and said, ‘What if we did a podcast?’ Before you knew it, we had a name, a logo, a hosting site, and got to work.”

On the podcast, Eily focuses on covering basketball-related topics and following the Blue Devils’ players in the NBA. The show runs “very much like a conversation between a small group of friends,” she said.

Like most new podcasters, Eily initially fretted about gaining listeners, but not any longer.

“One of my biggest worries was whether or not people would want to listen and whether I knew enough of what I was talking about to actually be podcasting about it,” she said. “This is all silly because repeatedly I was told that I was the most basketball-knowledgeable one of us on the podcast, so it was a worry that I should have shed sooner.”

Science can be a daunting subject for those who don’t study within the field or are a part of underrepresented groups that are oftentimes left out of the conversations. Zakiya Whatley and Titi Shodiya are working to change that.

In 2019, the two Duke Ph.D. alumnae were selected for Spotify’s Sound Up Program, an initiative to increase diversity in the world of podcasting, for their proposal of a podcast that portrays science as a topic for “errybody.” The end result was Dope Labs, which launched in 2019 and is now in its third season.

“I would like to say that this podcast is for everybody,” Whatley (Ph.D.’14 Genetics and Genomics) said during a CBS interview. “It’s intentionally designed for people who are most often left out from science, right, and from the scientific narrative. So that’s women, people of color. So we try to center what’s going on in those communities. So, we are on Instagram, Twitter, and we’re saying, ‘What are people talking about?’ ”

In an episode of Dope Labs Podcast, viewers can expect Shodiya and Whatley to cover science-related topics in addition to things such as AMSR or “cuffing season.” They bring a unique perspective by discussing information from the scientific world in a way that everyone in their audience can understand while also breaking the mold of what it means to be a scientist.

"You don't have to be this stereotype of what you feel like a scientist is," Shodiya (Ph.D.’15 Mechanical Engineering and Materials Science) said during a CBS interview. “And that, usually, is a real eye opener for viewers when we get introduced as Dr. Zakiya Whatley, Dr. Titi Shodiya.”