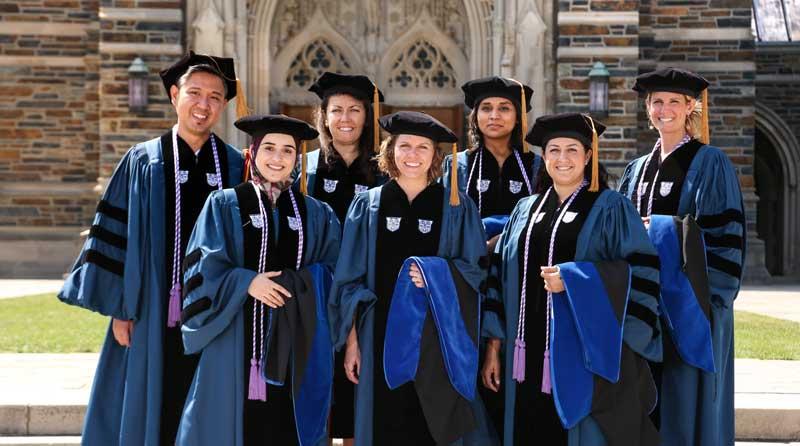 Marion E. Broome, Dean of the School of Nursing
Debra Brandon, Associate Professor and Director of the Ph.D. Program in Nursing

ABOUT THE PH.D. PROGRAM IN NURSING

Since its launch in 2006, the Ph.D. program in nursing has made diversity and inclusion one of its areas of emphasis. African Americans have made up nearly 30 percent of the program’s entering cohorts over the past five years, and they accounted for more than 31 percent of students in the program as of fall 2017.

Students from underrepresented minorities (URM) have demonstrated outstanding leadership while in the nursing Ph.D. program. Three students over the past four years have been selected as Robert Wood Johnson Scholars, and four of the program’s six current Jonas Scholars are URM students. They have also won a number of other awards, including a Ruth L. Kirschstein National Research Service Award, the student Scholarship in Cerebrovascular Disease and Stroke from the American Heart Association, the Student of the Year award at the School of Nursing, and multiple Dean’s Awards for Excellence in Mentoring from the Duke Graduate School.

The nursing Ph.D. program has helped enhance the inclusive environment at the School of Nursing in other ways as well. Associate Professor Debra Brandon, the director of the Ph.D. program, also oversees the Bridges to the Doctorate partnership between the schools of nursing at Duke and Winston-Salem State University (WSSU). The partnership aims to increase the number and percentage of URM graduates from WSSU’s M.S. in nursing program who go on to pursue and complete a Ph.D. program in nursing. Through the partnership, MSN students at WSSU receive curriculum enrichment, intensive summer research experiences at Duke, and additional support during their doctoral studies. The Bridges program has created a more robust and diverse pipeline of prospective nursing Ph.D. students for Duke and encouraged continued collaboration between research faculty at both institutions.

Also, four students from the Ph.D. program were instrumental in bringing the Racial Equity Institute (REI)—a workshop on diversity and inclusion—to the School of Nursing in 2015. They secured funding for the workshop and recruited faculty, students, and staff to attend.

IN THEIR OWN WORDS

EXCERPTS FROM THE NOMINATION

The Nursing Ph.D. program is profoundly aware that recruiting (and retaining) a diverse pool of PhD students supports the reality that deep learning occurs between students that are both similar and different in a variety of ways. This speaks to their desire to increase not only diversity amongst the program, but more importantly — belonging.

I have seen a strong commitment from the program leadership, with support from the Dean’s office, to the principles of inclusion and diversity.

[The Racial Equity Institute] training, while painful at times, was truly eye opening, and I firmly believe that it will promote a more informed and nuanced approach that will truly build upon the nursing profession’s holistic approach and intrinsic advocacy to effect greater diversity and inclusion.