The economics Ph.D. graduate was the leader of the opposition to Augusto Pinochet and later served as president of his home country of Chile.

This is the fifth in a series of profiles on notable Duke Graduate School alumni. The series is part of the school's celebration of its 90th anniversary in 2016. For more information about the anniversary, visit https://gradschool.duke.edu/90. 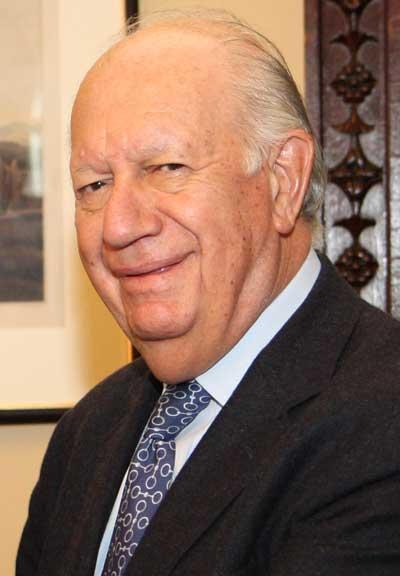 In 1988, in advance of a national referendum on whether to extend Augusto Pinochet’s presidency for another eight years, the country's oldest television station held its first political debate show in 15 years. Ricardo Lagos went on the show and spoke emphatically.

Looking directly into the camera, Lagos pointed with his index finger and said, “I will remind you, General Pinochet, that on the day of the 1980 plebiscite you said that ‘President Pinochet would not be a candidate in 1989.’... And now, you promise the country another eight years, with tortures, murders, and human-rights violations. It seems to me inadmissible, that a Chilean can have so much hunger for power, to aim to stay 25 years in power!”

It’s a moment they still refer to in Chile as “Lagos’s finger.” Opposing Pinochet was not the safest thing to do, and some thought Lagos might not live to see the next day. Instead, the appearance helped cement his stature as the leader of the opposition to Pinochet.

Later that year, Chileans voted against extending Pinochet’s presidency, and the dictator complied, starting Chile on its path back toward democracy. Lagos spent the 1990s as a minister in the democracy he helped usher in, and in 2000, he was elected its president.

Lagos was no stranger to opposing Pinochet. Upon earning his Ph.D. from Duke, he returned to Chile and worked in academia and public service. After the 1973 coup that brought Pinochet to power, Lagos and his family went into exile, first in Argentina and then in the United States.

During his exile, Lagos worked as an economist for the United Nations. That work took him back to Chile, and in the 1980s, Lagos became the leader of a coalition of political parties opposing Pinochet. That position had its costs. In 1986, he was arrested and detained without charge for three weeks after a paramilitary organization unsuccessfully tried to assassinate Pinochet.

Upon assuming the presidency in 2000, Lagos commissioned a report into the crimes under Pinochet’s regime. The report identified thousands of victims of torture. Promising that such human-rights abuses would never happen again in Chile, Lagos authorized compensations for the victims.

Under Lagos, Chile also signed a number of free trade agreements, including with the United States, the European Union, and China. Lagos entered office with the country in a recession and turned it into the fastest-growing economy in South America by the time he resigned in 2006. Chile had also reduced extreme poverty, improved infrastructure, created unemployment insurance, and passed its first divorce law. When he left office, Lagos enjoyed a nearly 75 percent approval rating—even higher than when he came into office, an unusual feat in Latin American politics.