This is the seventh in a series of profiles on notable Duke Graduate School alumni. The series is part of the school's celebration of its 90th anniversary in 2016. For more information about the anniversary, visit https://gradschool.duke.edu/90. 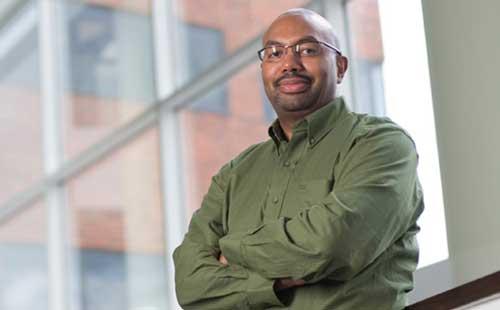 In 1999, Carmichael Roberts was just four years removed from life as a graduate student at Duke when MIT’s Technology Review magazine named him one of the world’s top 100 young entrepreneurs. Citing colleagues who lauded how he had poured “unmatched energy into his transition from lab bench to boardroom,” the magazine wrote that “Roberts’ greatest invention is himself.”

Seventeen years later, Roberts is helping scientists and entrepreneurs turn their discoveries into inventions that can benefit society. He is a general partner at North Bridge Venture Partners, where he finances and builds companies that create new products through chemistry, materials science and materials engineering.

After receiving his Ph.D. from Duke, Roberts went on to earn an M.B.A. from MIT’s Sloan School of Management and cofound several companies, including Arsenal Medical, 480 Biomedical, Surface Logix. He also cofounded Diagnostics for All, a nonprofit organization that is using a materials platform to make low-cost diagnostics for poor and rural populations in developing countries.

Roberts has also been involved with his alma mater. He is currently a member of Duke’s Board of Trustees, serving on the board’s Institutional Advancement Committee and the Committee on Honorary Degrees. He served on the Board of Directors of the Duke Alumni Association from 2007–2013 and on its Executive Committee from 2008–2013. His wife, Sandra Park (M.P.P.’93, J.D.’96), is a member of the Graduate School Board of Visitors.