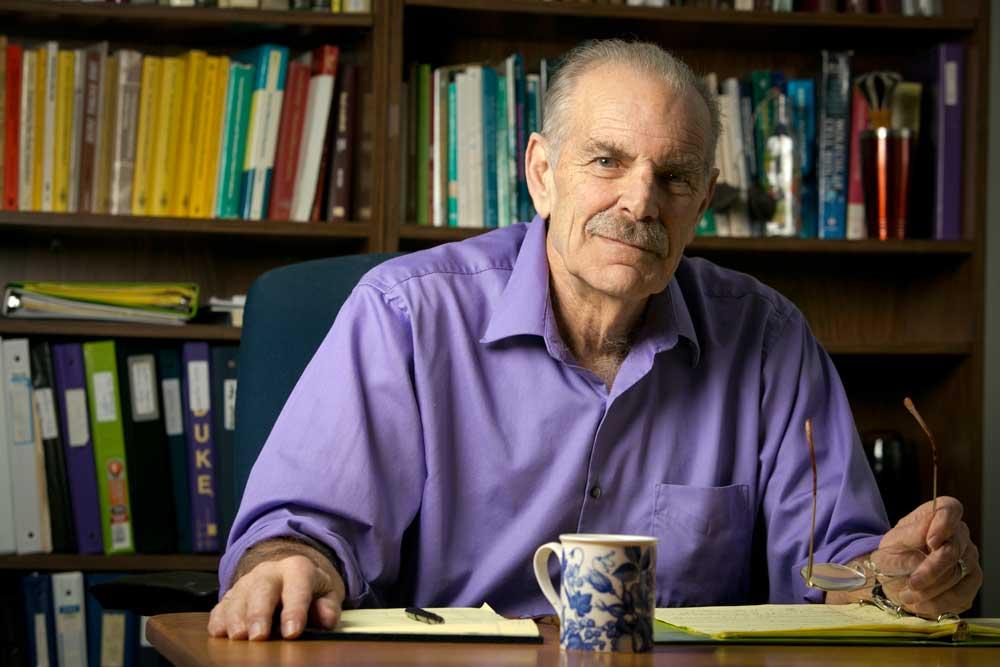 Michael C. Reed has been a member of the faculty at Duke since 1974. His current research involves the application of mathematics to questions in physiology and medicine. He also works on questions in analysis that are stimulated by biological questions.

During his four-plus decades at Duke, he twice served as chair of the Department of Mathematics and directed the Duke Center for Mathematics and Computation in the Life Sciences and Medicine. He has also been the Bishop-MacDermott Family Professor of Mathematics, is a Bass Fellow, and is a Fellow of the American Mathematical Society.

Reed has served as adviser to 23 Ph.D. students, including two current ones, and a number of postdocs. He is also principal investigator on a six-year, $2.18 million research and training grant from the National Science Foundation aimed at recruiting more outstanding undergraduates into mathematical biology, enhancing and expanding the training of graduate students, and increasing the diversity of research experiences for post-Ph.D. researchers.

“We are all equal. That’s the basis of good mentoring—respect for the individual you are mentoring. It’s not your role to manipulate them or mold them or tell them what to do. It’s your role to give them advice and to help them bloom in whatever directions that they’re going to bloom.”

“In my first semester I was taking a class with him and one week, although I worked on the homework problem set for the whole week, I was not able to make progress with it. Overwhelmed with self-suspicion and feelings of failure, I missed his early morning class, when the homework was due. He recognized that and emailed me to check on me. I met with him and explained my frustration and struggle. … He told me that I will ask him each and every question I have and then he will take me to lunch! I had so many questions that he met with me three times until I understand perfectly each and every question in the homework set. He was extremely generous with his time and greatly patient with me. That week I knew I had all the support I needed to be successful in the program.”

“In Mike’s office hangs a bulletin board on which he keeps a photo of each of his former graduate students. The photos and the diverse group of individuals they represented was a source of pride to him. I often found myself examining at the photos during research meetings with Mike; there was something intriguing about them. When it came time to add my photo, I understood why. The photos are chosen by the students themselves. On his bulletin board, as with his mentoring style, Mike encouraged his students to be themselves.”

“Mike has been the finest mentor/adviser I have ever had. He takes the mentoring aspect of his job very seriously and has a long history of looking out for his postdocs and graduate students; in particular, he is extremely supportive of women in mathematics (he is actually a member of the Association for Women in Mathematics).”

“I went to graduate school at Duke for a variety of reasons. At the time, the fact that Mike Reed was there was not one of them (as I was not yet interested in his field). In retrospect, very few people have had such a positive impact on my life as Mike (probably just my parents, wife, and kids). He perfectly guided me through the difficult time of graduate school, into the greater academic community, and let me stand on my own when the time was right.”