Ink from the Sky

Backed by a Guggenheim Fellowship, Ph.D. student Pinar Yoldas is working on a project that blends art and science, two of her passions since childhood.

In the mid-2000s, Pinar Yoldas spent three years at UCLA pursuing an M.F.A. in design and media arts. While there, her typical trek to campus was an hour-long bike ride from East Hollywood to Westwood along Santa Monica Boulevard.

“Every time I did this, I was literally inhaling the smog,” says Yoldas, a Ph.D. candidate in art, art history, and visual studies at Duke. “I kept thinking about this and ways to protect myself, and being angry at car drivers.”

Those smog-filled commutes, however, also provided the genesis for the idea that won her a prestigious Guggenheim Fellowship this April: Yoldas is going to distill the sky to make ink.

The seed planted in Los Angeles did not grow into a full-fledged project idea until last summer. On a trip to Beijing, Yoldas found inspiration in calligraphers who performed their craft in the streets with giant brushes—“a choreography of thought,” as she describes it. At the same time, she also witnessed air pollution far worse than what she experienced in Los Angeles.

“It deeply saddened me. I just thought, ‘What if I condensed this pollution and made ink out of it, and we can actually express our feelings about this moment in time?’ ”

To pull that off, Yoldas plans to build an architectural structure that would stand about 50 feet tall in a highly visible city with serious air-pollution problems (she is considering Los Angeles, Beijing, Istanbul, Paris, and Bogota). The structure would contain a mechanism that filters hard particles from the polluted air, turns them into ink, and funnels the ink into a container at the base of the structure.

Once she has collected that ink, Yoldas plans to give it to calligraphers, thinkers, and poets, with one question:

What would you write with this poisonous ink that is literally the air we breathe?

Ask Yoldas about her childhood, and you can trace a direct link between her interests then to her work now, a melding of art and science. While growing up in Turkey, drawing became an early passion for Yoldas—something she picked up from her father, an architect who sketched constantly.

Many parents proudly display their kids’ doodles on the refrigerator, but Yoldas’s parents went a step farther. By the time she was 5—her Impressionist phase—they had amassed more than 2,000 of her drawings, and they held an exhibition in a public library. Yoldas recalls that the event, her first solo show, made headlines in national newspapers and drew dignitaries from the local government and the cultural affairs office.

“I guess that must have been the peak of my career,” she says with a laugh.

Later, Yoldas began to explore the other major interest in her household—science. Her mother was a physicist, and science was well-represented in the family’s book collection. Yoldas attended a high school that specialized in the sciences, where she studied college-level organic chemistry and was on the organic chemistry team, winning a bronze medal in Turkey’s National Science Olympics (“We were real hardcore nerds,” she says).

When it came time to choose a career, however, Yoldas veered back to art. She liked science, but not the specialization needed to achieve success as a scientist. So she pursued architecture, but never lost her fondness for science.

While at UCLA, Yoldas became interested in the brain and began to audit some neuroscience courses. She came to Duke as a visiting artist in 2010, drawn in part by the university’s neuroscience research. She spent several months in the lab of Professor Kevin LaBar, whose research areas included the biological underpinnings of emotions.

After her stint as a visiting artist, Yoldas returned to UCLA for a year before coming back to Duke to pursue a Ph.D. focusing on media arts and sciences. She is also nearing completion of a certificate from Duke’s Center for Cognitive Neuroscience.

A Form of Environmental Activism

In summer 2013, between the second and third years of her Ph.D. program, Yoldas received funding from two prominent media arts and cultural institutions in Europe for a project that contemplates the biological effects of the Great Pacific garbage patch—an ocean gyre that is home to a large collection of marine debris, mostly plastic.

The exhibition, “An Ecosystem of Excess,” showcases imaginary creatures that might evolve from eons of living in the plastic soup, such as the Pacific balloon turtle, which has an inflatable back to help it swim, and the Pantone birds, whose plumage bears the corporate colors of the plastic bottle caps they consume. The collection, currently touring in Europe, is still growing, and Yoldas has been invited to give a number of talks about the project (video of her talk at Aksioma). 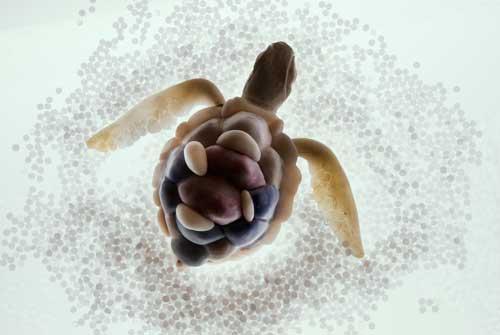 Working on the project also compelled her to change her lifestyle, Yoldas says.

“Now I can’t drink from plastic bottles,” she says. “I gave away half of my clothes because it was plastic, acrylics, and synthetic materials. It’s an ethical problem. What we are doing is affecting a lot of organisms that are no less valuable than us humans.”

With her Guggenheim project, Yoldas is turning her attention skyward. The fellowship, which starts at the end of the summer and lasts a year, will provide the funding to research the logistics of her idea of turning air pollution into ink, but she will have to raise additional money to build the structure.

Yoldas has consulted with William Chameides, former dean of the Nicholas School of the Environment, about how to filter hard particles out of the air, and she plans to assemble a team of scientists and engineers to help her develop the mechanism.

As someone who grew up with no shortage of environmental issues—from Chernobyl to ozone depletion to climate change to plastic oceans to toxic air—Yoldas says she wants to use this project to wrestle with the mental effects of living with such concerns.

“It’s a lot of complicated things happening on multiple levels, but we don’t really talk about its impact on our psychology and our emotions,” she says. “I want to talk about this; I want to hear what other people think about this.

“It’s kind of a form of environmental activism. It’s not like we are in the streets protesting, but it’s happening in a more subtle way. You are going to think about this and talk about this, but it’s not based on rage or anger, but rather on other emotions and human faculty. It’s a deeper way of thinking.”