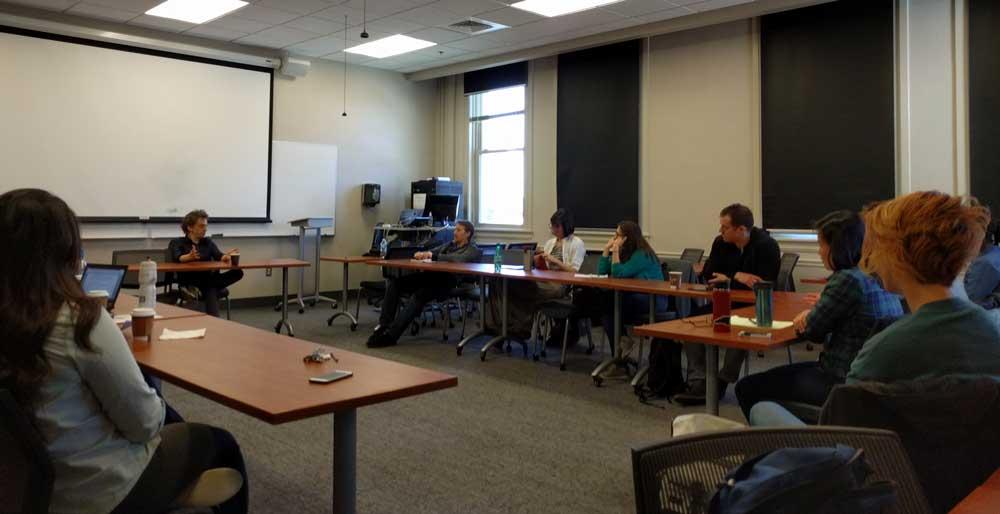 The Philosophy Department was very fortunate to receive The Graduate School’s Professional Development Grant to host Dr. Zachary Ernst, a philosopher turned data scientist. Dr. Ernst began his career as a tenured philosophy professor at Mizzou (University of Missouri) but is now a data scientist in Chicago. During his campus visit for the event “An Ivory Tower with a View: Approaching the Non-Academic Job Market with a Humanities Ph.D.,” he shared three main pieces of advice regarding his experience of being on the non-academic job market with a Ph.D. in philosophy. His suggestions are particularly valuable for anyone interested in a career in data science.

1. The programming part is easy.

Humanists often assume that they can’t transition into data science or other technology fields because they don’t have the technical skills required, such as computer programming. While it is true that you are likely to be asked to code, Dr. Ernst made it clear that it was by far the least significant barrier.  Anyone who is motivated and intelligent enough – this probably describes all Duke graduate students, humanities or otherwise – can learn to code. As a matter of fact, Dr. Ernst has met and interviewed many job applicants who were hired for their intellectual virtues, despite not having any programming experience. Many of these people picked up programming along the way, and went on to have fruitful careers in data science.

Since Dr. Ernst used to be a tenured professor, he knew the academic job market well. Getting an academic job, he said, is like shooting a small target with a sniper rifle from afar; it has a very limited window of opportunity and each job has very specific demands and requirements. Because of this, academic-job seekers must aim carefully and take a precise shot. Hunting for non-academic jobs, Dr. Ernst suggested, is akin to wielding a machinegun. You don’t aim for precision – you take as many shots as possible and, if you miss, you adjust based on what you learned. This means applying to as many jobs as possible, even if you don’t think you meet the requirements. Dr. Ernst explained that every interview is a learning experience, and interviews are easy to come by in any growing industry.

3. Employers are ultimately looking for evidence of your abilities.

Another obstacle is that job postings in data science and tech often ask for degrees not in the humanities. But Dr. Ernst reminded us not to forget what a degree stands for. Practically speaking, a degree is simply proof that someone can do a certain job. Proof can come in forms other than a degree – it can also come in the form of projects or internships. He also explained how a person’s achievement as a graduate student in the humanities can be very relevant to employers if it is presented properly. For instance, graduate students know what’s involved in teaching a college-level class, but interviewers may not! State explicitly that you have designed a course and communicated complex ideas. It’s an impressive feat, so don’t be afraid to show off a little.

Graduate students in humanities often face the dreaded question from strangers about their chosen career path: “What are you going to do with that?” Instead of limiting the answer to two possibilities – fatalism, where an academic career is the unavoidable fate of humanists, and defeatism, where we acquiesce to the stereotype of the impractical scholar — Dr. Ernst’s experience in data science provides us an example of new paths.

We would like to thank The Graduate School, since this event would not have been possible without its Professional Development Grant. We would also like to thank Maria Wisdom from Versatile Humanists at Duke for participating in the event, in which she gave a valuable workshop on resources available to graduate students. Stacey Meyers and Lisa Olds from the philosophy department were tremendously helpful in guiding the operational aspects of the event. We also would like to recognize Andrew Janiak, our department chair, for his encouragement and support. You can read more about Dr. Ernst’s advice on the Versatile Humanists at Duke blog.

Lok Chan is a Ph.D. candidate in philosophy under the supervision of Kevin Hoover. Lok is interested what artificial intelligence and statistics could teach us about the age-old practice of learning and testing. He also moonlights as a jazz bassist.