The Biology of Etiquette 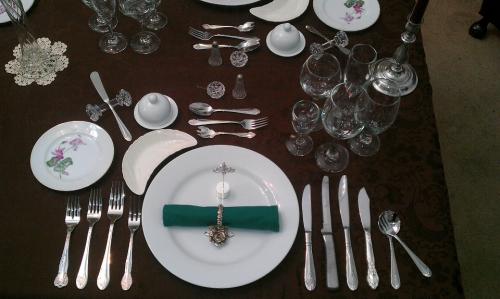 By the time the entrées arrived, the 75 or so students at the Graduate Etiquette Luncheon had already peppered the speaker with an impressive number and variety of questions. “How should I…?” “How do I…? “When would I…?” Since I’d already broken an etiquette guideline by scooting my chair around while seated instead of standing, turning the chair to face the speaker, then sitting back down, I sympathized with the anxiety in those questions. My biologist’s brain wondered: why do we care so much about how to place a fork or hold a glass? What might be the biological value of all this attention and worry?

My hypothesis comes from one of my favorite words: egregious, from the Latin roots e-, as in “emerge,” and grex, which means “flock.” Something egregious is so serious it would get one kicked out of the flock. The related word gregarious means “of or loving the flock,” that is, being very social. Being in or out of the flock was an existential worry for early humans, as it is for all social animals.

Humans are a profoundly social species. We are keenly aware of what other humans are doing, saying, and even thinking. Cognitive scientists call our deductions about others’ thoughts our “theory of mind,” and neuroscientists (including Dr. Michael Platt here at Duke) are discovering neural circuits that process social information such as another’s identity, status, emotion, and intent. Colloquially, our brains are hardwired for social information. Our neural circuitry evolved under conditions in which our ancestors thrived by working closely together. Some of that wiring likely plugs into parts of the brain that direct attention, alertness, and the production of anxiety.

How does this apply to etiquette? During the luncheon, we learned of American and European styles of etiquette, so which style you display conveys information about your group affiliation. Similarly, one can identify oneself as being expert and thereby perhaps of a higher status by holding a wineglass by the stem or base so as not to warm the wine and thereby change its flavor profile. These clues to group identity and status are of prime importance in a social species. Our brains are built to work with and worry about these clues.

How will a biological interpretation of etiquette help you remember which fork to use or how to properly introduce your partner to your boss? Well, it won’t. But, when you next feel the anxiety of anticipating an egregious etiquette violation, remember that you’re facing a very old human problem. And as a descendant of ancestors who survived by successfully navigating their social worlds, think of your primitive foremothers and forefathers and relax: you’ve got this!

Returning to graduate school after working as a scientist in biotechnology, James Wahlberg is a student in Duke’s Graduate Liberal Studies program, where he’s exploring connections between the humanities (narrative) and science (neurobiology).