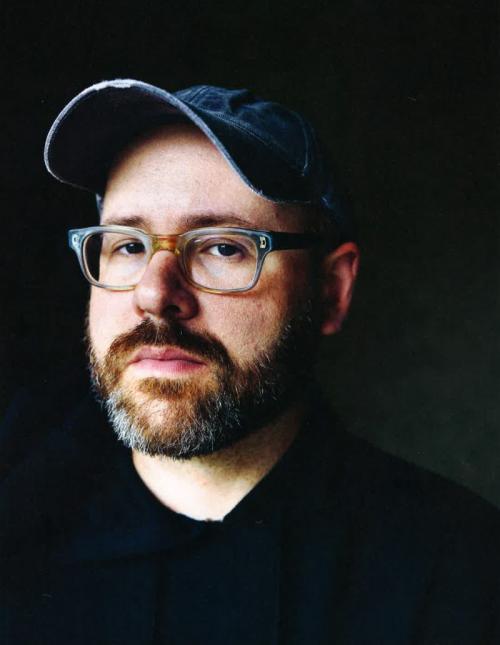 Zach Blas is an artist, filmmaker, and writer. After completing his M.F.A. at UCLA, he received his Ph.D. from Duke’s Program in Literature in 2014. He’s currently a lecturer in the Department of Visual Cultures at Goldsmiths, University of London. His work has been exhibited internationally at venues including the de Young Museum, Tate Modern, Gwangju Biennale, the Berlin International Film Festival, Matadero Madrid, Van Abbemuseum, Institute of Contemporary Arts Singapore, ZKM Center for Art and Media, and Museo Universitario Arte Contemporáneo.

To start, could you tell me about your art practice?

Currently, I'm making immersive multi-channel video installations. Formally, I'm working with various computational processes to create the moving image components of my installations, whether computer graphics, artificial intelligence, or machine learning. I also work with actors and shoot live-action video. Conceptually, my artwork since 2017 has been focused on the fantasies and beliefs that influence and motivate the Silicon Valley elite and the tech industry broadly. One such installation orients around contemporary uses of psychedelic drugs in Silicon Valley, the emergence of the nootropics (or smart drugs) industry, and being a tech visionary. I’m in pre-production on a new installation that’s about artificial intelligence and religion, particularly focusing on California’s history of fringe religions and cults and how this has influenced cultural understandings and assumptions about AI as savior for some and judge for others. I’m reimagining Michelangelo’s The Last Judgment for this, and a major filmic reference point is Kenneth Anger’s Invocation of my Demon Brother.

How do you see your art fitting into your broader academic practice?

As an artist, I'm baroque. I like the artwork to hold a lot together, to have a too-muchness. This is one of the beauties of making art to me, as opposed to writing academic texts. The artwork does not need to resolve or conclude an argument. For me, the artwork needs to create a frame in which to bring ideas, desires, fantasies, politics, and more into a positioned conversation. The artwork may offer some critical arguments, but I prefer it overflowing. I’ve always been attracted to art-making because it’s a practical research process that can operate in so many different capacities and contexts. For instance, my earlier work was about making tools of resistance. But my current work is not exactly about manifesting political alternatives. Rather, I’m trying to make experiential the fantasies and beliefs driving the tech industry today, as fantasy and belief have much to tell us about the outlooks of the future held by extremely powerful figures and corporations in the world today. Sometimes, I find myself turning to [Frederic] Jameson's The Political Unconscious to make these artworks. I enjoy working with his theory spatially, like when I made SANCTUM (2018), which is my take on spatializing the political unconscious of airport security.

On a practical level, have you found it difficult to get people to count your art as academic research, as something that contributes to your academic profile and career?

That’s actually why I ended up outside of the U.S. I used to be very much committed to being an artist and scholar equally. I wanted to write academic books, articles, and all the rest, and also maintain my art practice and all that that demands. But U.S. universities typically enforce a strong divide between being a scholar and being an artist. Ultimately, I wanted the activities of research, writing, and art-making to work for me as one career, not two. In Europe, studio art is understood and welcomed as a form of academic research. Ph.D.s in art practice have been around for some time in Europe. The U.S. is actually quite behind on supporting practice-based research.

When I was an M.F.A. student at UCLA, I met Katherine Hayles (former professor in Duke’s Program in Literature), who was cross listed with my art department at the time. Back then, I had no theoretical training, as all my education had been studio degrees. I did my first theoretical studies with Hayles, and she ultimately convinced me to pursue a Ph.D. I went to Berkeley—that's where I started my Ph.D. in the film and media track of the Rhetoric department. But that program wasn’t right for me, and Kate encouraged me to apply to transfer to Duke, which I did. After my Berkeley experience, Duke was pretty harmonious for me. It was a moment when some media theorists had landed in the Literature Program, as Kate, Tim Lenoir, and Mark Hansen were all there. I also very much appreciated that I had continuity with Kate, that she had first met me as an artist at UCLA. I continued my art practice at Duke, which intersected with my theoretical interests, like in my dissertation on Informatic Opacity.

Back to Europe: I started to get art invitations to Germany and the U.K. while still a student at Duke. That's how I got a taste of European art institutions, which I found very exciting, given their often strong focus on public intellectualism and the artist as a researcher. Thus, when I was offered a job at Goldsmiths in London, I jumped at the opportunity. Relocating to Goldsmiths completely changed what is possible for me institutionally, in terms of what counts as research, promotion, and moving through the academic system. Besides the fluidity around what counts as research (whether a film, book, or art installation), there is also an emphasis on the non-academic impact of one’s work, which certainly suits an artist.

I hear you're editing a book with some colleagues from the Literature program.

I'm working with Melody Jue, who was in my cohort, and Jenny Rhee, who was a few years ahead of me; we all studied with Kate Hayles. We’re editing a book titled Informatics of Domination (forthcoming from Duke University Press), which is organized around this chart from Donna Haraway's A Cyborg Manifesto. Across 32 entries, the two-column chart outlines various transformations in the world as a result of developments in science and technology at the close of the 20th century. For instance, the chart begins with “representation --- simulation,” suggesting that simulation replaces representation. There are wackier entries like “Second World War --- Star Wars.” We've invited artists, scholars, theorists, historians, fiction writers, and scientists to engage with one line in the chart. Their prompt is to historicize the present with the two terms, and a third term can be added. Media theorist Rita Raley has taken on “representation --- simulation” and added “generation” as a third term, to address the generative quality of AI neural networks and deepfakes. I'm excited about this project; we’ve been working on it for over two years at this point. I think it's a really amazing group of people. Some experimental interventions include artist and writer Patricia Reed, who's part of the xenofeminist collective, designing a series of diagrams at the end of the book as a way of critically engaging with the very form of the chart itself.

Many responses to your work focus on what it has to say about technology while ignoring its queer aspects, even though so much of what you do is deeply informed by feminist and queer theory and speaks to queer experience. What is the importance of queerness to your art practice?

It’s ultimately personal. I am queer. It's the way I see the world, and it's how I live my life—and I’d also say my aesthetic sensibility is queer more than anything else. Queerness is an all-consuming engine and interpreter as far as my practice goes, although this doesn’t mean my artworks automatically import aesthetic tropes of queerness. Queerness manifests in various modes. There are more obviously queer works, like my artworks on biometric facial recognition’s failure to recognize minority subjects. But my most recent work The Doors (2019) is obliquely queer; in fact, I’ve been consistently asked what’s so queer about this work. In The Doors, one of my approaches to queerness is taking the wacky or outlier seriously, which I would say is the appearance of lizards in the installation as narrators. This kind of queerness is on my mind right now because I just taught Sadie Plant's book Zeros + Ones in my undergrad class “Feminist and Queer Technoscience” at Goldsmiths. The book presents a minor pathway into the histories of computers and networks. Sadie Plant begins by taking footnotes written by Ada Lovelace in the 19th century as a starting point to tell a feminist history. The point here is to give the footnote weight and importance, to center it. Sadie Plant demonstrates that a minor detail can open up alternate stories on the subjects that slip through the cracks of history.

Another way queerness manifests in my art practice is via complications of desire, such as in SANCTUM, which is an artwork about the desire to submit oneself to systems of surveillance. When I was making SANCTUM, I recalled seeing a drag king performance with security agents undressing passengers. That performance drew my attention towards queerness’s awareness of the messy imbrications of desire and power.

Future artworks of mine are looking to be much more sexually queer. I am planning a series of works that will be anchored in West Virginia, which is where I'm from. The first will hopefully be a feature film called Hot. It's about a queer couple, and one self-immolates in a worker protest at a power plant. But the town thinks this person has spontaneously combusted instead. I find spontaneous human combustion very queer—there is a too-muchness to it, and I’m working with it to fictionalize different intensities of and relations to heat today, including climate change, political rage, and sexual attraction. My tagline for Hot is, “What if a body is too hot for this world?”

What’s drawing you to work on West Virginia?

I grew up in a town called Point Pleasant. It’s where Ohio, Kentucky and West Virginia meet. That's where I spent my first 18 years. It's a tiny little village; all the men in my family there are coal miners. My father was the oddball—a Puerto Rican hippie. Have you ever heard of the Mothman? He’s from my hometown. I want to turn to West Virginia after so much work on Silicon Valley. West Virginia is going to completely flip the perspectives that drive the artwork. From silicon to coal. From social media companies developing algorithmic filter bubbles to rural communities subjected to conspiracy theories and post-truth clickbait. From microdosing on LSD to increase worker productivity to the ravages of the opioid epidemic. The Silicon Valley artwork is a culmination of years of walking down certain research paths. I always feel a need to make artwork that I have a personal positioning within. I lived in California for much of my 20s, so I have intimate experience with tech culture there. Living in London has given me immensely productive critical distance to make my artwork on California.

As I look towards starting work on the film script for Hot, I think of what Melody Jue once told me: you should make the work that no one else can. It's time for me to return to Appalachia, so that I can reckon with the conditions there that produced me, and still mark me. 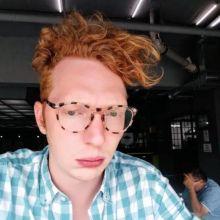 Jordan Sjol is a cinema and media studies scholar, film consultant, and writer. His scholarly work focuses on media technologies and global power regimes. Currently a Ph.D. candidate in Duke’s Program in Literature, he is completing a dissertation on computation and communication media’s role in late twentieth-century financialization.