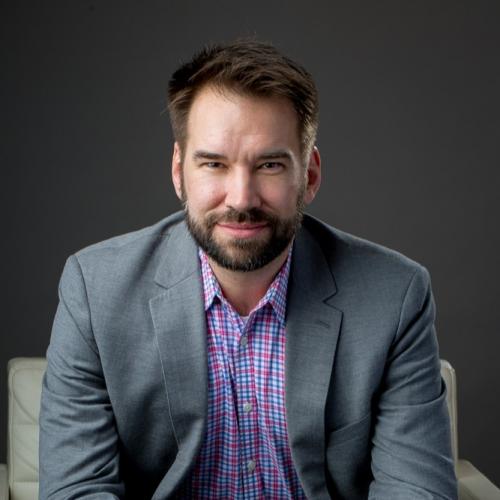 Mark Steen received his B.S. in Physics from Davidson College and his Ph.D. in Physics from Duke working with Bob Behringer. After graduating from Duke, he worked with McKinsey & Company as an Engagement Manager and Consultant for five years.  He next worked as an Equities Analyst with Sanford C. Bernstein & Company for two years and as a Technology Analyst with the Citadel Investment Group for five years. Since 2013, Mark has been a consultant at Corning Incorporated.

Tell us a bit about yourself.

I grew up in North Carolina; I went to high school in Raleigh and attended Davidson College for undergraduate studies. I then wound up at Duke for my graduate studies. It wasn’t my plan to stay in North Carolina all of that time, but I do love the state and was lucky to be able to stick around for that long. From there I moved on and joined McKinsey & Company, which is a consulting firm, and then worked on Wall Street a little bit, and finally wound up working for Corning Incorporated. Through that time, I’ve lived in a number of different places, and now I’m married and have three kids…and I’m still a big Duke basketball fan.

What professional or career plans did you have in mind as you were completing your graduate degree? Did your plans change as you went through graduate school?

My goals did morph over time during my graduate studies. When I first came to Duke, I did not have a clear view of where I wanted to come out, but I would have guessed my most likely path would be in academia, probably at a teaching-focused college. That was true until the last few years of my studies, when I really started to think about it. As I got closer to the end, I saw some things that made me think that academia might not be the best path for me. So I started exploring other possibilities.

A friend of mine, Martin Hall, and I recognized that the path set up for Ph.D. students was clearly academia, and (at least at the time) there were not a lot of well-trodden paths outside of that, nor resources to explore other options. So we worked together with The Graduate School and developed a career day for graduate students to explore non-academic opportunities. As I recall about a hundred companies came that were interested in recruiting Duke Ph.D. students across all fields and students really enjoyed it—it was quite successful.

I think it is a great idea for The Graduate School to continue improving professional development opportunities for all graduate students. There is a bias in any group to influence others to believe that the choices the group has made are the right choices for others, too. As a student, I saw that in academia the advisors tended to have a bias for believing that academia is the right choice for their students, often without putting themselves in the mindset of the student or thinking about what is best for that student. It’s understandable, since academia has been a good choice for the professors’ own careers. But of course it’s not right for all students, and this bias for academia does not have to be the case.

I’ve also worked recently with one of the professors in Statistics at Duke, and that department has good ideas of how to prepare students professionally for non-academic career paths. From the perspective of this Statistics professor, there are plenty of places in the world where people are doing poor quality statistics because the people are not well-trained. According to him—and I agree with this philosophy— the role of graduate study is not just to train students and then have them do more research, but it’s actually to take a given field and make the practice of that field in the world stronger.

When did your opportunity with McKinsey arise, and how did you find yourself in that role?

In those couple of years near the end of my studies, a number of big business consulting groups were recruiting Ph.D.s and other advanced-degree students from Duke. A friend of mine and Martin’s got interested, let me know about it, and I connected with McKinsey & Company. I was lucky enough to be asked to participate in a weekend-based project to get a preview of what work with them would be like; then I got interested, applied, and was thankfully selected to join the firm.

How did obtaining a Ph.D. in Physics at Duke prepare you for your career in consulting?

I use the skills that I developed as a Ph.D. student all the time. I think the confidence gained from being able to get through the Physics Ph.D. program, learning to do the research that is required, and frankly the coursework as well, has been one of the keys to my success. I think people take a much too narrow view of what it means to get a Ph.D., especially regarding the types of careers a Ph.D. can or should look for after graduate studies.

One example of how my time at Duke has been so useful for my career is the fact that I can work in a material science company with both our research & development teams, where fairly technical issues like the coefficient of thermal expansion are usually the concern, and with our finance and commercial teams, where the business implications of the science are more important. The work in physics gave me the foundation for understanding the materials science aspects and my consulting experience after my time at Duke gave me the ability to turn around and discuss that technical information in commercial terms. I attribute a lot of my success to this ability to switch between the technical and non-technical, and I would not be able to do that without doing the work I did at Duke.

For those who aren’t familiar, can you briefly highlight what Corning, your current employer, does?

Sure. Corning is a 170-year-old U.S.-based, global company that has a mission of creating life-changing innovations. In detail, that means the development of a number of technologies that people are familiar with: the glass for Thomas Edison’s first lightbulbs, the labware Pyrex, Corning dishware, and so on. In fact, you probably have used three to five Corning products today without realizing it. For instance, we are the inventor of and one of the world’s largest manufacturers of optical fibers. We also make Gorilla Glass, the cover glass on phones. The flat display glass on tablets and digital screens is also a Corning product. The company has a broad scope with a long history of innovations that people utilize every day.

Can you speak more about your current role and projects at Corning? What is your favorite thing about what you do?

My current job runs special projects for the C-Suite (in particular, the CEO, CFO, CTO, and CSO) of Corning. “Special projects” means anything from working on mergers and acquisitions to helping develop strategy for the corporation to working on specific research projects to developing the CEO’s message for the top two hundred executives. It can entail a lot of different things, which is the most fun part about my job.

Currently what I’m doing is leading Corning’s approach to climate change. This is a really interesting topic, again one that I don’t think I’d have the same currency in if I had a different academic background. As a result, I’ve gotten to work outside of Corning with several former Cabinet officers and some current White House officials. That’s pretty surprising and I didn’t see it coming when I started at Corning! 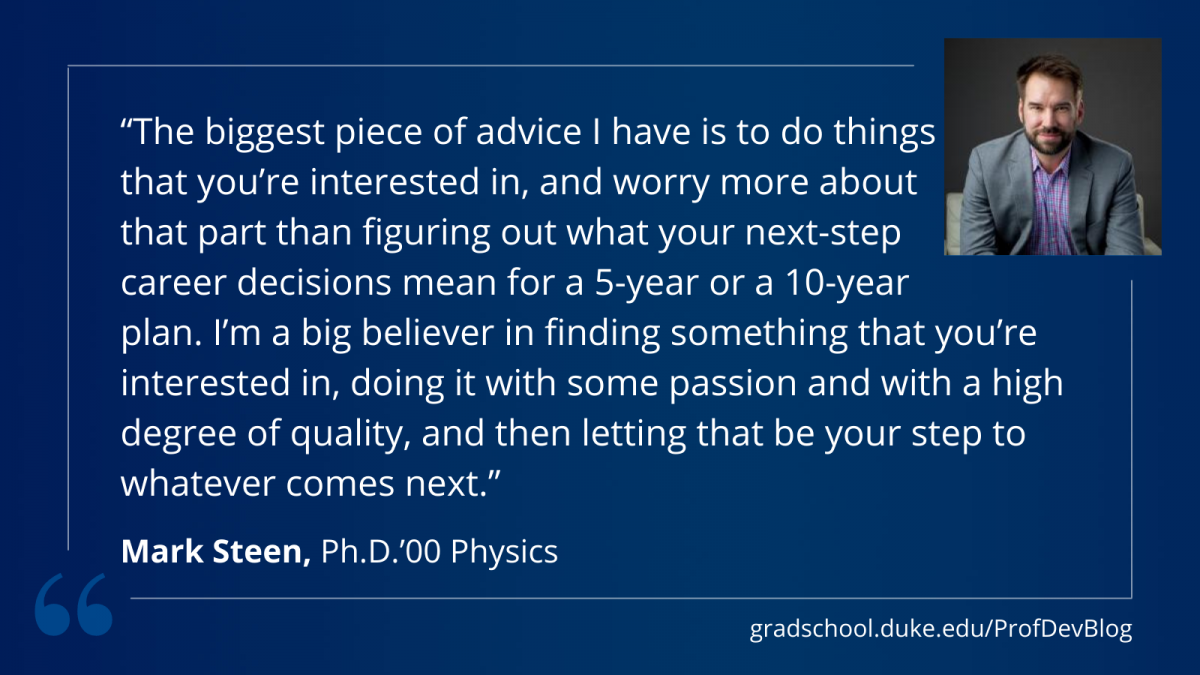 Do you have any advice for graduate students who are considering non-academic career paths?

The biggest piece of advice I have is to do things that you’re interested in, and worry more about that part than figuring out what your next-step career decisions mean for a 5-year or a 10-year plan. I’m a big believer in finding something that you’re interested in, doing it with some passion and with a high degree of quality, and then letting that be your step to whatever comes next. I think that’s actually how I wound up going to grad school at Duke, because I really enjoyed physics at Davidson and I just wanted to know more about it. And it was enough interest so that I could dedicate myself to the hard work that is required to get through the program, and that led to other opportunities that I hadn’t foreseen coming in. I’ve followed this process for a number of different steps and it’s worked out pretty well.

I want to add, though, for people who are like me and tend to be intellectually curious and interested in many things: find a focus. Finding a focus doesn’t mean that the next career step is what you are going to do forever. But make sure that you focus on something that you are trying to get done short-term so that you do it well, and then move on to the next thing when the time is right.

What is one of your favorite memories of Duke?

I would definitely say that the other graduate students I went to graduate school with are the common factor in all of my best memories of Duke. I think, I’ve realized in retrospect, that is probably because they were all both highly capable and really intellectually curious. And it turns out that intellectual curiosity is the thing that creates the biggest connection for me with other people. 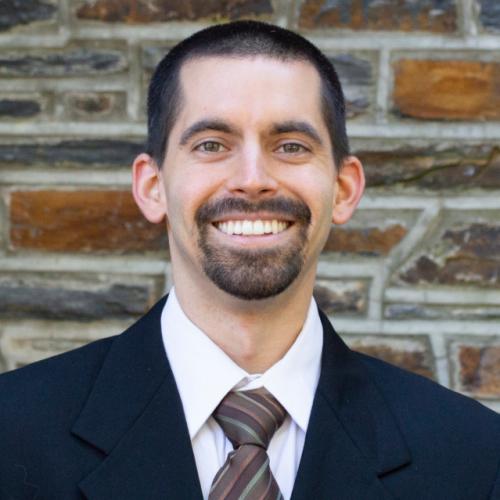 Ryan Kozlowski recently received his Ph.D. in Physics at Duke studying the dynamics of granular materials with Bob Behringer and, after Bob’s unexpected passing, Joshua Socolar and Karen Daniels (NCSU). He is now a Visiting Assistant Professor in the Physics Department at Berea College. He enjoys running, climbing, and hiking, though not always at the same time.