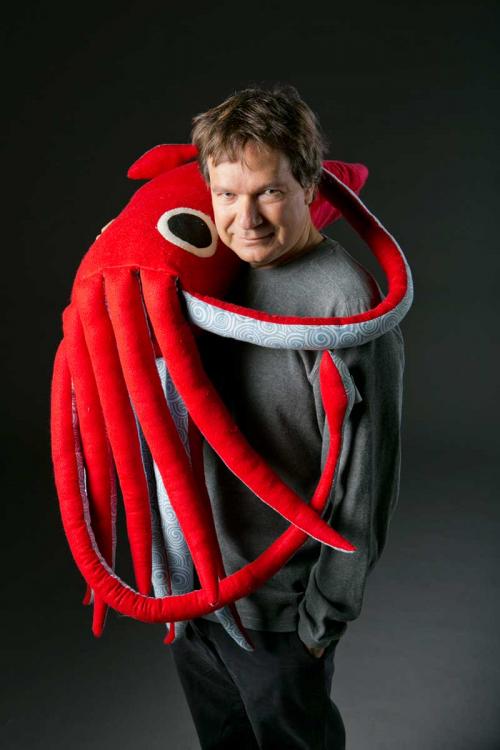 After majoring in mathematics in college, Sönke Johnsen worked as a daycare provider for Quakers, a kindergarten teacher, a freelance carpenter, and a dance teacher for 3-year-olds before deciding he needed more education. So he went through an alphabetical list of subjects and settled on biology.

Johnsen earned his Ph.D. at the University of North Carolina at Chapel Hill and completed two postdoctoral training experiences before becoming a scientist at Woods Hole Oceanographic Institution. He joined the faculty at Duke in 2001. His lab investigates aspects of visual ecology, including topics such as the visibility of aquatic animals and transparency in animal bodies and human lenses. He has published extensively, including two award-winning books.

“A mentor has to care about your future, and they have to fight for it and they have to believe in it. They have to, when they first meet you, think about where you are going to go and where you want to be and have a vision in their head that this is possible.”

On being a tireless advocate for students

On how his own adviser influenced his career

“During my first year of grad school, all of my meetings with Sönke started in the same fashion. The first question was ‘Do you have a car yet?’ followed closely by ‘Do you have a girlfriend yet?’ When my answers to both questions were ‘no,’ he would emphasis that happy scientists did the best science. Frankly my social transition to grad school was rough, and Sönke’s emphasis on my own well-being helped ease the transition. Rather than cracking the whip to get short term production, he realized that what was best for my own long term development was probably just to breathe.”

“He looks out for students all the time—constantly seeking opportunities for them for funding or advancement. More broadly, even now years after ending his tenure as DGS, he's probably still THE most regular faculty member at our weekly department happy hours hosted by students. Given how much our students talk about wishing they had the opportunity to talk with more faculty, I'm 100 percent certain that, if more of our faculty were like Sönke, our students would be the happiest in any program in the world.”

“Sönke has somehow mastered the ability to be both professional and also supportive of his students no matter what their needs are. His amazing sense of humor helps us all not to take ourselves too seriously. Sönke is such a successful mentor partly because he takes an unconventional approach – he has a quote by Thomas Edison on his wall that reads, ‘There are no rules here, we are trying to accomplish something.’ And accomplishing things is what Sönke does, all while being a kind and supportive mentor in the process.”

“When I joined the lab, I had yet to develop the self-discipline and composure that one would like to see in a graduate student. Sönke was patient with me during those years and provided a wonderful role model for learning how to fit a restless mind into a stable and productive life.”