Ph.D. students Tyler and Alexis Johnson find support in each other and the Sloan Scholars community 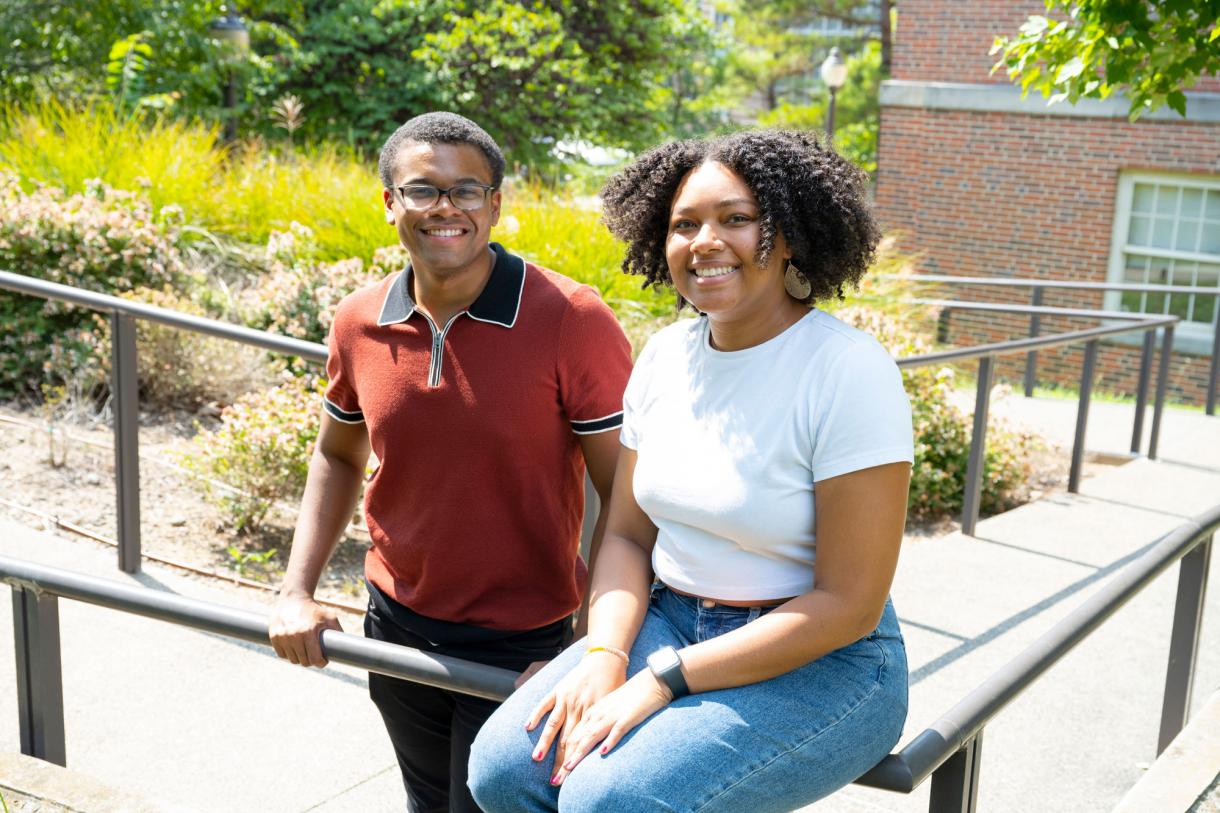 Alexis and Tyler Johnson always had a lot in common: acrobatics classes, a love of Marvel movies, and the same sense of humor. The siblings didn’t mean for graduate school to be one of those things. Yet, their academic paths also converged at Duke.

The siblings grew up in Overland Park, Kansas, with birthdays only four days apart, but they didn’t intend to continue their academic lives with one another. It was a coincidence that they chose undergraduate institutions 12 miles apart in Chicago, and that Duke drew them both in for graduate school. Now, they live about two miles apart in Durham and conduct research in buildings that are right next to one another.

Unintentionally following her older brother’s footsteps, Alexis came to Duke in 2021 because of the array of research in the chemistry Ph.D. program. In Assistant Professor Kevin Welsher’s lab, she has been working on real-time tracking of single molecules and its relation to things such as viral infections. She is especially interested in method development.

The siblings may conduct research near each other, but their research topics are farther apart. Alexis finds it hard to conceptualize what her brother does, but the two put in extra effort to understand the basics of one another’s research.

“It seems kind of similar, but these are very different worlds when you’re only thinking about your niche,” Tyler said. “So being able to communicate chemistry to a physicist is really hard, and vice versa. So this personal and professional relationship is helping us to be able to communicate these kinds of hard concepts, but in a more understandable way, especially in a conversational sense.”

Despite the differences in their research, the siblings have found common ground. Both are Sloan Scholars in the Duke University Center of Exemplary Mentoring, a Graduate School-led initiative that works to increase the number of Ph.D. graduates from underrepresented minorities in the physical sciences and engineering. Sloan Scholars receive supplemental funding and take part in programming designed to help them fully integrate into the Duke community and take advantage of Duke’s resources.

Both siblings said the Early Start Research Immersion Program for Sloan Scholars played a key role in their transition into graduate school at Duke.

“When I came here, I got a really keen sense that, OK, the people around me want me to succeed,” Tyler said about the support for Sloan Scholars. “And if I’m feeling like I’m maybe not meeting my expectations or that I’m not doing that well, I had people to talk to, to put things into perspective, or to help me find resources or marshal resources to get back to where I feel like I’m making good progress.”

Although the siblings don’t see one another at Sloan Scholar events often, they still make the time to be a source of support for one another.

“Being a grad student, it’s just very important to have a support system,” Alexis said. “And that can come in many shapes and sizes.”

As the siblings have forged their individual paths, they’ve had each other’s backs along the way. Throughout Alexis' transition into graduate school, she received advice from her brother about issues he had been through three years prior. However, Tyler says she doesn’t really need his help for anything, except dispatching cockroaches.

“Even though grad school isn’t seen as fun,” Alexis said, “it’s nice to have those moments that really cheer me up and kind of just are funny things to laugh at throughout the day.”

Whether it’s explaining their research to one another, watching movies together on the weekends, or poking fun when they see each other on campus, having each other in Durham has made the town feel more like home.

“Community is really, really important,” Tyler said. “We kind of just always have this touchstone of, at the end of the day, even if school is bad or interpersonal relationships are weird, my little sister is down the block and we can hang out if we want to. So there’s just a certain amount of comfort that comes with that.”