Perrin, who earned a master's in English in 1950, was best known for his writings on the pleasures of New England country life.

This is the fourth in a series of profiles on notable Duke Graduate School alumni. The series is part of the school's celebration of its 90th anniversary in 2016. For more information about the anniversary, visit https://gradschool.duke.edu/90. 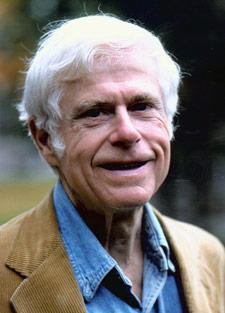 When Noel Perrin was lecturing on the importance of energy conservation one day, one of his students challenged him to back up his talk with real action, so he went looking for an electric car.

It was 1990, well before such vehicles became commonplace, but Perrin tracked down a company in California that sold him a converted Ford Escort. Getting that car home, though, proved to be adventurous. His 1992 book, Solo: Life with an Electric Car, recounted the obstacles he faced in driving the car back to Vermont, such as when he discovered that it couldn’t quite scale the Rockies.

Environmentalism was a prominent theme in the works of Perrin, who established himself as a well-known scholar, book critic, and essayist. He penned more than a dozen books, including a 1969 work on the history of literary censorship, Dr. Bowdler’s Legacy, that was nominated for a National Book Award.

His best known writings, though, were his collections of autobiographical essays on the pleasures of living the country life on his 85-acre Vermont farm. After Perrin died at his farm in 2004, his obituary in The Washington Post read, “With his cosmopolitan critical sensibility, his supple, unmannered prose and his love of rural life, Mr. Perrin was something of a combination of Edmund Wilson and E.B. White.”

Writing was in Perrin’s blood. Both of his parents worked as advertising copywriters, and his mother, who inspired Perrin to become a writer, wrote several novels. After receiving his master’s from Duke, though, Perrin first served in the Korean War as a forward observer in an army field artillery unit, for which he was awarded the Bronze Star.

After his service, he taught at the Woman’s College of the University of North Carolina (now UNC-Greensboro) and earned a master of letters from Cambridge University in England. In 1959, he joined the English department faculty at Dartmouth.

At Dartmouth, Perrin taught American literature and became an authority on modern poetry, particularly the works of Robert Frost. He was named a Fulbright professor at Warsaw University in Poland in 1970 and was twice named a Guggenheim Fellow. He became a full professor at Dartmouth by 1970, began teaching in the environmental studies program as an adjunct professor in 1984, and remained at Dartmouth until his death.