Mattawa (Ph.D.'09 English) is the recipient of a 2014 "Genius Grant" for his work as a poet and translator of Arabic poetry.

This is the eighth in a series of profiles on notable Duke Graduate School alumni. The series is part of the school's celebration of its 90th anniversary in 2016. For more information about the anniversary, visit https://gradschool.duke.edu/90. 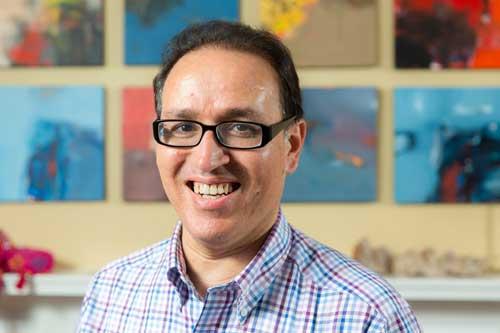 Growing up in what he calls “a middle-class, nouveau riche, petrodollar family” in Libya, Khaled Mattawa did not read much poetry. When he developed a love for poetry as a senior at the University of Tennessee, however, he turned to poems in his native tongue for inspiration.

What he discovered was pure genius.

Mattawa, an associate professor at the University of Michigan, Ann Arbor, has translated nine books of contemporary Arabic poetry, including the works of some of the most highly respected poets from the Arab world. He has also written four collections of his own poems, as well as a book on the great Palestinian poet Mahmoud Darwish.

In 2014, Mattawa was named a MacArthur Foundation Fellow, an honor popularly known as the “Genius Grant,” for his work as a poet and translator of Arabic poetry.

Well before the MacArthur award, Mattawa had already earned a number of accolades, including several Pushcart Prizes, the PEN Award for Literary Translation, and a Guggenheim Foundation fellowship.

Mattawa, who moved to the United States with his family as a teenager in 1979, says he began translating Arabic poetry to make himself a better poet.

“I was beginning to write poetry, and I wasn’t liking a lot of the results that were happening with my own poetry,” he told WBUR Boston in an interview after receiving the MacArthur award. “When I began to translate, it was really a way for me to almost look at the poetry from the inside, like the American legend of just taking the car apart and figuring it out in your own garage and that’s how you become a good mechanic.

“For me to become a decent poet, I need to take great poetry and take it apart through translation. So translation really taught me how to write poetry when I was starting out.”

The translation work also made Mattawa a cultural ambassador. In many cases, his translations were the first time those Arabic poets’ writings were made accessible to Western audiences.

“I’ve connected two people—a poet and a reader—that, had it not been for translation, would not have happened,” Mattawa said. “To see that happen is always greatly moving and rewarding.”