Townes (A.M.'37 Physics) paved the way for the laser and is one of five people to win both the Nobel Prize and the Templeton Prize.

This is the second in a series of profiles on notable Duke Graduate School alumni. The series is part of the school's celebration of its 90th anniversary in 2016. For more information about the anniversary, visit https://gradschool.duke.edu/90. 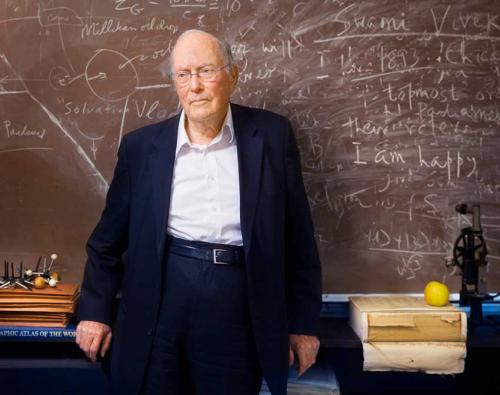 From printers to supermarket scanners to space exploration to the Internet, the legacy of Charles H. Townes permeates virtually every aspect of daily life.

Townes, who earned a master’s in physics from Duke in 1937, helped create microwave-emitting devices called masers (short for “microwave amplification by stimulated emission of radiation”). His creation paved the way for the invention of the laser, spawning a technological revolution.

Stimulated emission of radiation—the idea at the heart of the laser—was a theory from the mind of Albert Einstein, but it was Townes who identified and created the conditions in which that theory could become reality. In 1953, he built his maser, the first device that operated on the principles of the laser. In 1958, he helped draw up the blueprint for a device that would emit light instead of microwave—a laser.

For his work on the maser, Townes shared the 1964 Nobel Prize in physics. Forty-one years later, he won the Templeton Prize, which was founded as the religious equivalent of the Nobel. That put him in elite company with Mother Teresa, the Dalai Lama, Desmond Tutu, and Soviet dissident novelist Aleksandr Solzhenitsyn as the only people to have received both the Nobel and the Templeton Prize.

Townes, who donated his $1.5 million Templeton Prize to church-based charities and to Furman University (his undergraduate alma mater), spent decades advocating for the convergence of science and religion. “I look at science and religion as quite parallel, much more similar than most people think and that in the long run, they must converge,” he once said.

After earning his master’s from Duke, Townes got his Ph.D. at the California Institute of Technology in 1939 and joined Bell Laboratories, where he developed wartime radar bombing and navigational systems before joining the faculty at Columbia University in 1948. In 1961, he was named provost and a professor of physics at the Massachusetts Institute of Technology. In 1967, he became a professor of physics at the University of California at Berkeley, where he remained until his death in January 2015 at the age of 99.