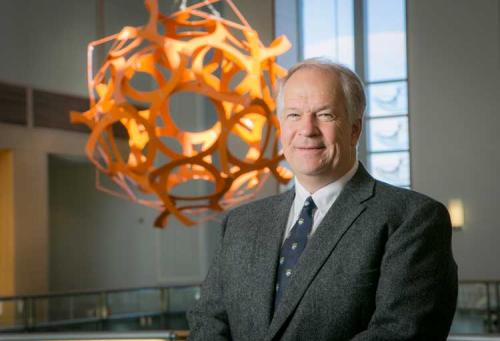 Joseph A. Izatt came to Duke as an associate professor in 2001 after teaching at Case Western University. He was appointed the Michael J. Fitzpatrick Professor of Engineering in 2014. Izatt is also a professor in the Department of Ophthalmology, a faculty member in the medical physics graduate program, and director of the Laboratory for Biophotonics at Duke.

Izatt’s work centers on the application of optical technologies for non-invasive, high-resolution imaging and sensing in living biological tissues. He has received numerous awards for his work, including fellow designations at the Optical Society of America and the International Society for Optics and Photonics. Most recently, he received the NVIDIA 2016 Global Impact Award for his work on real-time 3D imaging and guidance of intraocular surgery using nVIdia GPUs.

“For me, the most important aspect of mentoring have to do with really treating the students and trainees as scientific peers, which they genuinely are. … I think it’s very important for students to be involved in all aspects of the research process.”

On How Students' Mentoring Needs Change

On Balancing Mentoring with Other Responsibilities

“Prof. Izatt has gone out of his way to introduce me to colleagues in the field and help expand my professional network. Just recently, he came into my office and told me the most well-known professor in our field was interested in hiring me as a post-doc—Prof. Izatt had spoken to his colleague without me asking him to do so.”

“Dr. Izatt routinely challenges me to consider new applications of the technologies I am developing. He is quick to praise even modest successes and then follows with constructive criticism. This feedback prompts a discussion that motivates further work without disparaging current progress. I like to think of Dr. Izatt as the manager of a small corporation with students organized into  project teams busy  developing  new  products,  which  gives  the  lab  an  air  of  excitement  and innovation.”

“Prof. Izatt has the unique ability of understanding exactly the intended meaning of what we say—regardless of how cumbersome our manner of saying it—and rephrasing our statements with added caveats of his own that point us in the right direction. The end result is always our improved understanding of what we originally meant and constructive feedback that does not neglect our intentions and self-esteem.”