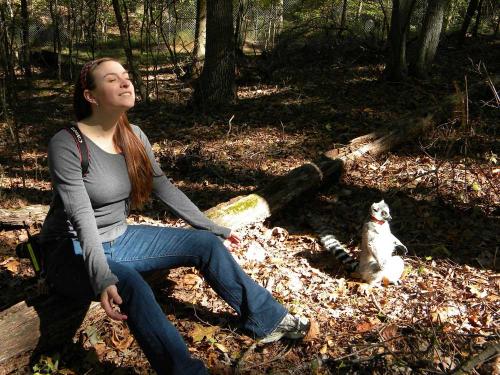 Lydia Greene’s journey from the concrete jungles of New York to the rain forests of Madagascar began with a stroll to the Bryan Center.

In August 2007, Greene had just started her undergraduate studies at Duke after taking a two-year deferral to pursue ballet professionally. She needed a work-study job, so she went to a job fair at the Bryan Center, expecting to end up stocking books in a library.

Something on one of the tables at the fair caught her eye: a life-sized stuffed animal that she did not recognize. She inquired and learned that it was a sifaka, a species of lemur, and that the representatives at the table were recruiting students to serve as tour guides for the Duke Lemur Center (DLC), which at the time did not have quite the campus and public presence it enjoys today.

Greene leaped at the opportunity, and she is still working at the DLC 10 years later. These days, though, she is doing much more than just giving tours. Greene is in her third year in the ecology Ph.D. program at Duke, working on a dissertation that examines the gut microbiome in lemurs.

“It's like people who later in life find religion,” she said. “I left the ballet world and found lemurs, and they just became a focal point of passion and a realization that I could do something else with my life that could last for a really long time.”

Greene’s fascination with lemurs dovetailed with her undergraduate major (evolutionary anthropology). Her undergraduate research examined scent-marking behavior and communication in lemurs, and she also studied whether the bacteria in lemurs’ scent glands were responsible for producing the compounds that lemurs used to signal to each other. That line of inquiry helped her discover the world of gut-microbiome research.

After earning her bachelor’s degree, Greene spent three years as an associate in research at Duke, working on studies of meerkats for Christine Drea, who is now her Ph.D. adviser. Greene missed her lemurs, though, and when she began graduate school, she decided to do her dissertation on the relationship between leaf-eating lemurs’ gut microbiome and their health and nutrition.

“I have an interest in nutrition in general,” she said. “I grew up as a ballet dancer, and eating healthily was something I always struggled with. Something just really clicked for me, this idea that we now have a way to study a mechanism that’s the direct link between what you eat and how healthy you are. That kind of mechanistic link was just really fascinating.

“So my wheels sort of started spinning: Could I apply this to lemurs and could this be a way we could better optimize diets in captivity? Could we learn something about the quality of the forest in Madagascar and what kind of lemurs may be able to survive in that forest? It’s sort of bridging my own nutrition background and this passion for lemurs and wanting to do conservation and make a difference, and it all blended on the gut microbiome.”

“The Early Researcher Catches the Feces”

Studying what happens in a lemur’s gut means having to collect what comes out of that gut, so when Greene is at the DLC these days, she spends most of her time waiting for the Coquerel’s sifakas to do their business.

“When I'm in a poop-collecting phase, I’m at the DLC pretty much every morning at 7 o'clock—the early researcher catches the feces,” Greene said. “Some of the animals would actually poop in the tube for me. One gets spoiled as a researcher here at the DLC because the animals are so habituated to people. And then you go to Madagascar and the animals are like, ‘I want nothing to do with you,’ and then you are running after them with a tube in the forest.”

Greene had to whack her way through dense jungles while chasing swift-swinging tree-dwellers, but the field work in Madagascar also gave her the chance to collect samples from multiple lemur species sharing similar habitats and presumably similar food sources, enabling cross-species comparisons. That added new dimensions to her research—the DLC has only one leaf-eating species—and gave her a new perspective on the animals she’s studying.

“Seeing them in the wild for the first time was pretty remarkable,” Greene said. “By that point, I had spent seven years here studying them in captivity, and then seeing them just jump around Madagascar for the first time, and to realize that these animals are real in the wild, that the David Attenborough documentaries I watched actually exist in a real place, and that could be a part of my life—that was pretty incredible.”

Aside from her research, Greene also continues to pursue her passion in lemurs through education and conservation efforts. She still leads tours at the DLC and conducts outreach talks for visitors. She also volunteers with the DLC’s SAVA Conservation initiative in northeastern Madagascar.

“It really can be like paradise on some days, with the sun streaming in and the animals sunning themselves out in the woods.”

Aside from the human connections, Greene’s decade at the DLC has also earned her a place in the other primate community there, as she discovered one day while collecting samples from a “sassy” juvenile sifaka named Arcadia.

“She was on the tree and I was down below her, not anywhere near her, scooping up her poop,” Greene said. “She came down and made an aggressive vocalization at me; she was annoyed I was there. I backed off, but her mother Drusilla jumped over and just smacked her.

“At that point, I felt pretty well taken care of by Drusilla.”

Lydia Greene’s graduate research has been supported by, among other sources, a National Science Foundation Graduate Research Fellowship, a University Scholars Fellowship, a James B. Duke Fellowship, and an International Dissertation Research Travel Award. Learn more about Greene’s work at lydiakgreene.weebly.com.