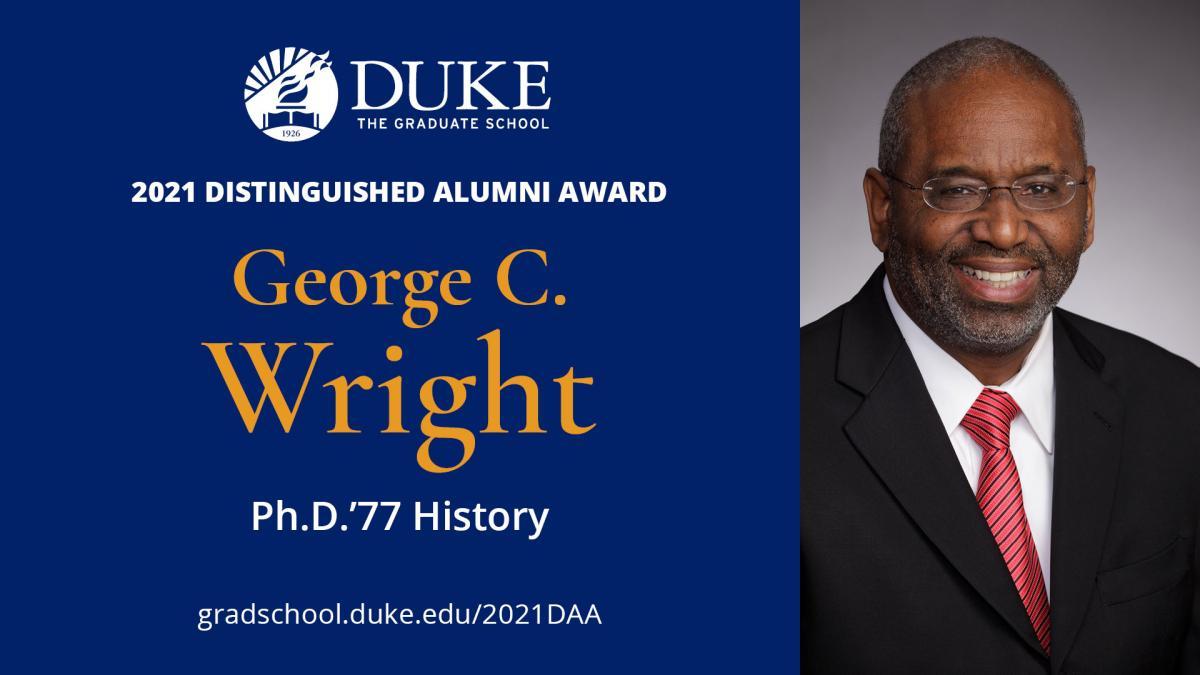 When George C. Wright arrived at Duke as a history Ph.D. student in August 1974, he felt the kind of anxiety that many new graduate students can relate to.

“I was scared to death; I just knew that Duke had made a mistake,” he said.

That anxiety abated, however, when he spoke with his director of graduate studies, the noted historian Anne Firor Scott.

“She said to me, ‘You’re going to make it here as easily as anyone we’ve ever admitted to the Ph.D. program,’ ” Wright said. “I was shocked, I was stunned, I was excited, but her comments typified what other faculty said to me. They were so supportive of me … and it made me realize that I was not pursuing this by myself.”

That realization helped Wright (Ph.D.’77 History) on his way to a long career as a scholar of African American history, a professor, and an administrator. All along the way, he tried to give others the same kind of support that he had received.

For his accomplishments and decades of outstanding service, The Graduate School has named Wright the 2021 recipient of its Distinguished Alumni Award, given annually to a graduate of a Duke Ph.D. program in recognition of their service to their fields of endeavor, to Duke, and to society in general.

In early 2020, Wright sat down with Graduate School Dean Paula D. McClain to discuss his time at Duke and his career.

While at Duke, Wright studied the Black history of Louisville. He continued to pursue that topic once he was back at UK. His research has resulted in numerous articles, book chapters, essays, and three books.

His first book explored how Louisville’s “polite racism” differed from the overt racism in more notorious parts of the South. The second book delved into the racial violence in Kentucky, documenting more than 250 lynchings in the state—more than double the figure that most scholars had previously cited. His third book examined the civil rights movement in Kentucky from the 1890s to the 1980s.

In 1980, Wright joined the faculty at the University of Texas at Austin, where he later became the Mastin Gentry White Professor of Southern History and vice provost for undergraduate education. He was voted one of the university’s 10 best faculty for 12 consecutive years. He also earned multiple teaching awards, including the UT Austin’s highest teaching honor, the Lillian and Tom B. Rhodes Centennial Teaching Fellow.

“At age 30 it dawned on me: Other than having lived in North Carolina for three years and in Kentucky, I hadn't been anywhere, and I wondered what would happen if I went some place where nobody knew me in that regard,” Wright said of his move to Texas. “So I started looking for another job just for that reason, and that took me to the University of Texas at Austin.

“I thoroughly enjoyed it. I was there for 13 years, and after awhile I said, ‘I'm not going anywhere else … except Duke University.’ ”

At the time, though, he thought a return to Duke unlikely.

“In reality there was no reason for Duke to hire me,” he said. “They had the preeminent scholar in the country in John Hope Franklin, and then where most universities said they could not find one person to teach Afro-American history, Duke had three.”

Wright was wrong, and he had Franklin to thank for that. The two became friends during the 80s, and when Duke was looking to hire a new William R. Kenan Jr. Chair in American History in the early 90s, Franklin put forth Wright’s name.

When Duke called Wright about the position, he and his wife had just built a new home in Austin—so new that they hadn’t put up pictures or curtains yet. The opportunity, though, was too good to pass up. Wright came back to Duke as the Kenan Chair, as well as vice provost for undergraduate programs and director of the Afro-American studies program.

Paving the Path for Others

By 1995, Wright had been a successful scholar and faculty member for nearly two decades, and had what he called “the perfect situation” at Duke. Yet, another opportunity that he could not refuse led him back to Texas and into university administration.

Wright said one reason he became an administrator was his interest in providing more opportunities for women. That interest had its roots in his Ph.D. years, when he soaked up the influence of the women in the cohorts of fellow Black graduate students in the Duke history department.

When he became an administrator, Wright made expanding opportunities for women an area of focus. For instance, upon his arrival, UT Arlington was spending $1,000 a year on women’s studies. By the time he left, that number had grown to $250,000.

In 2003, Wright became president of Prairie View A&M University, driven by his desire to work at a historically Black institution. He would serve 14 years in that post, overseeing many significant expansions.

Wright also created other types of educational opportunities. For instance, when Barack Obama became president, Wright wanted to attend the inauguration, but he also wanted his students to share in the experience.

“I have a rule: Anything I do, students have to do or it’s not important enough,” he said. “So we spent $40,000 in taking a large number of students to President Obama’s inauguration. My whole view as president was that I wanted to give students access to various things and new ideas.”

After concluding his presidency in 2017, Wright returned home to UK, where he is currently a senior advisor to the president and the interim vice president for institutional diversity. He was recently inducted into the UK Arts and Sciences Hall of Fame.

Wright has also been a committed supporter of graduate education at Duke, illustrated by his current service on the Graduate School Board of Visitors.

For him, it’s all part of paying it forward.

“No matter how smart you are, how good you are, you did not make it on your own,” Wright said. “There were other people who paved the way  to make it possible for you to be there. That's what I have to do: I've got to make sure that other people have the same opportunities that I had.”