In 2007, at a time when some German graduate programs were getting smaller, the programs at Duke and the University of North Carolina at Chapel Hill got bigger by merging with each other. The resulting Carolina-Duke Graduate Program in German Studies is one of the largest in the country in terms of faculty size.

The program now boasts 29 Ph.D. students, with six more starting in fall 2015. Emma Woelk, who entered the program in 2010, will become its first graduate in May. She discussed her experience with The Graduate School. 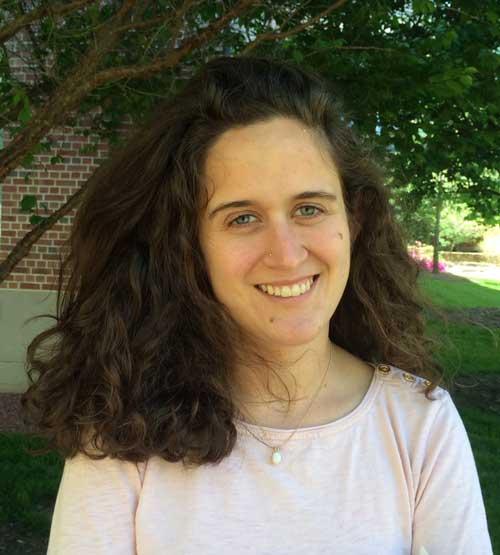 When you were choosing a graduate program, how did the fact that this was a joint effort between two schools affect your decision?

I thought of it as a plus because I knew I would have access to more faculty and more classes. I don’t think my understanding of it at that point was much deeper than that. I knew I wanted to go to a larger program where there would be larger class sizes. I thought it was exciting that they were trying something new, and I knew it meant a lot more variety. Those were the things that initially attracted me. Over my five years in the program, I saw more and more of what the advantages really would be.

So what was it like going through the program?

The overall experience has been very positive. I really like both campuses. I love not only having access to both libraries’ collections—which any student at one university or the other would have—but also having a carrel at Duke and a teaching office at UNC. The atmospheres at both campuses are really nice; they are both great work environments. I like that I have close relationships with professors at both campuses.

I feel like all kinds of resources at both campuses are at our disposal, and that includes things like summer grants. I’ve been really lucky to have really generous funding from both Duke and UNC to allow me to do what I want to do over the summer. In the past year that meant going to archives in Argentina, and a couple years ago, that meant going to New York City and taking an intensive Yiddish class. I got funding for that from both of the centers for Jewish studies at UNC and Duke. I don’t think I would have been able to do that if I hadn’t had both of those sources of funding and if I didn’t have people on both campuses supporting me and helping me find those sources.

Another aspect that’s really great is getting to teach in two kinds of schools. Most people in our program switch between the two schools and they teach during the year at both Duke and UNC. My experience is a little different. I received a five-year Royster Fellowship from UNC, which committed me to teaching there during the academic year. During the summer, I was employed by Duke to work on the Duke in Berlin program, and this will be my fourth year doing that. I get to go teach Duke students in Berlin for six weeks, which is awesome. It has given me the chance to work with a different group of students and cover different material, as I have been teaching a history/culture course called “Jewish Berlin” rather than a language class. It’s an exciting experience for both the students and me because we really use the city of Berlin as a classroom. We go on walking tours, meet with experts on the ground, and visit museums and memorials.

What was your dissertation on?

My dissertation is about Yiddish, the language and the culture, in postwar German writing. The question I pose is, “Why was this Jewish-Germanic language taken back up during the Cold War on both sides of the Berlin Wall when it really didn’t have that much of a presence among German-speaking Jewry before the war?”

Which school did you pull for during basketball season?

I rooted for whoever I had chosen to win in my family pool, which was neither Duke nor UNC. I am so not a sports fan that I don’t even remember what school it was. I think I probably picked Kentucky since everyone picked Kentucky this year. Most people in my family went to the University of Kansas. I try to stay pretty neutral.

What would you tell your 2010 self about this program?

I would definitely emphasize to my 2010 self the amount of flexibility this program has and the chance to work really closely with students and faculty at both universities. You get a sense of what it’s like to teach a four-person class over the summer and what it’s like to teach a larger language class of almost 25 people at a big state school. Having now gone through the job market, I think it is valuable to be familiar with both types of institutions and many different types of class settings.

Woelk graduated from Vassar College in 2008 with a bachelor’s in German studies. After graduation, she spent a year in Berlin as a Fulbright Fellow, researching disability policy in the GDR. She then spent a year in her hometown of Austin, Texas, working at a bilingual English‐Spanish preschool through AmeriCorps. Woelk’s past research in German Studies has included work on young adult literature, race in 20th-century Germany, and the history of science in Germany.