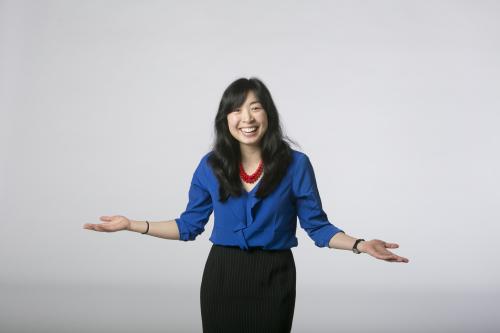 As a University Scholar, Irene Liu is expected to serve as a graduate mentor to undergraduates and younger graduate students in the program. Liu, however, hasn’t stopped at merely meeting those expectations.

Liu, a recipient of the 2014 Dean’s Award for Excellence in mentoring, has sought out and created many other opportunities for mentoring, such as organizing on-campus symposia for fellow graduate students, mentoring students at Meredith College, and working with young girls in Durham County schools.

“Mentoring others truly makes Irene happy,” a faculty member who nominated Liu for the award says. “This is why she does so many things as a mentor and this is why she is so good at it.”

A former Duke student who was mentored by Liu as an undergraduate and continues to receive her support says that the first time they met, Liu asked him what he wanted out of the experience. With that knowledge, he says, Liu guided him on his academic path and his research.

“Her advice on the courses I should take were based on me being adequately prepared for the MCAT, getting a more in-depth understanding of the research that was being performed for her project, and satisfying my interest in genetics,” the students says. “Irene made sure I had the necessary foundation to excel at my research and that I could fully explain the science behind every step of any scientific procedure I performed.”

Liu’s desire to help others understand science extends to outside the university. She has participated in a number of mentorship and outreach programs in the community, including the Women and Math mentoring program in Durham County, which pairs female professionals with eight-grade girls in public schools. She participated in Career Day at a Teach for America school in Warsaw, North Carolina, to discuss her research and why studying science is important. She has also shared her experience as a scientist with students at Meredith College.

Liu, whose research focuses on the evolution of blackbirds, has worked to spread her scientific enthusiasm and expertise as well. In 2013, she gave a lecture for sixth-graders at the North Carolina Museum of Natural Sciences about birds and how she became a scientist, and she is delivering a similar talk in April 2014 for the “Invite a Scientist” series at the North Carolina Science Festival.

Aside from mentoring roles with the University Scholars Program, Liu has also helped undergraduate, graduate, and professional school students, particularly women in the sciences, through various other public-service channels on campus. She has worked with the program committee for Duke’s Women and Science in Engineering, serving as program coordinator the past two years. She has also served on the advisory committee for Personal Finance@Duke.

“Irene is more than a scientist and a researcher,” a faculty nominator says. “She is devoted to improving the world around her through her dedication to public service, as both a team member and as a leader.”

Comments from Faculty and Mentees

“Her motivation fundamentally is to help others to succeed.”

“She has made an exceptional difference in my life by helping me realize my own potential as a biology major and an aspiring scientist, and thus her commitment to her students, coupled with her innate talents as a teacher, make Irene Liu a scholar, mentor, and role model who has touched the lives of hundreds of undergraduates and has made a tremendous mark on the Duke community.”

“Irene has been very effective incorporating undergraduates into her research in ways that have given those students real ownership of their work and thus the best possible environment to understand what science is about.”