What Is a Mentor? 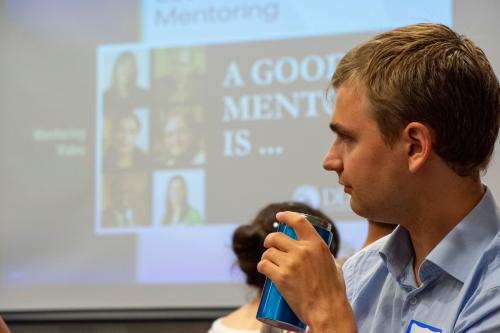 For graduate students, a mentor is someone who serves as a guide throughout their professional training. But mentors are more than that. They provide both professional and personal advice in transitioning into, and out of, graduate school. They give constructive feedback on writing, teaching, and other elements of career design. They can also serve to help students balance professional goals with their personal lives or give emotional encouragement during challenging times. The most successful students have multiple mentors in their network to help with various challenges facing them during and after their graduate school tenure at Duke.

Duke has addopted Stanford University sociologist Morris Zelditch's oft-cited definition of a mentor.* The Graduate School has compiled examples from the nomination letters for winners of the Dean's Award for Excellence in Mentoring in each of Dr. Zelditch's mentoring categories:

People with career experience willing to share their knowledge

People who give emotional and moral encouragement

People who give specific feedback on one’s performance

Sources of information about, and aid in obtaining opportunities

Of the kind of person one should be to an academic

Difference Between an Adviser and Mentor

While there is quite a bit of overlap, advisers and mentors can serve different functions for students during their graduate education.

Advisers are usually connected to students’ home department and provide direction on course selection, departmental requirements, and might direct a dissertation or thesis.

Students generally self-select their mentors for both professional and personal guidance. Many mentors are student colleagues who can speak to many issues differently than faculty mentors.

The term “mentor” derives from a character in Homer’s epic tale, The Odyssey. After leaving to fight the Trojan War, Odysseus, King of Ithaca, leaves Mentor in charge of his household. In this role, Mentor also taught Odysseus’s son, Telemachus. The goddess Athena later disguised herself as Mentor in order to support Telemachus in his quest to reclaim Odysseus’s throne. Over time, the term came to mean an experienced and trusted adviser, especially one who advises those with less experience. Mentors are those who help us move toward our full potential.