Layna Mosley is a professor of politics and international affairs in the School of Public and International Affairs and the Department of Politics at Princeton University. She is an expert on the politics of the global economy as well as international relations more broadly. Her notable works include Global Capital and National Governments (Cambridge University Press, 2003), Labor Rights and Multinational Production (Cambridge University Press, 2011), and the article “Coming to Terms: The Politics of Sovereign Bond Denomination” (with Cameron Ballard-Rosa and Rachel Wellhausen). She also serves as co-editor-in-chief of the journal International Organization and as a member of the executive committee of Princeton’s Nieuhaus Center for Globalization and Governance. She received her B.A. from Rollins College and her A.M. and Ph.D. in Political Science from Duke University.

What motivated you to study political science?

I’m really interested in international political economy, particularly the politics of the global economy and the link between what happens inside countries and how they engage with international finance and trade. I do a lot of work on political economy of government debts and government borrowing. I also continue to research the link between multinational production and global supply chains as well as labor rights and working conditions. More generally, many political scientists now are thinking about how issues around climate change and, in my case, climate finance influence how governments borrow money (investors concerned with Environmental, Social and Governance, and how governments use ESG to attract investment, for example).

I went to a small liberal arts college (Rollins College), and I majored in International Relations, which involved courses in economics, history, politics and foreign languages. During my first semester, the Berlin Wall came down, and I happened to be taking Introduction to International Relations.  I became interested in looking at the changes in the post-Soviet area, and I decided to minor in Russian. I was fascinated by the transition of formerly Communist countries to democratic capitalism. I became especially interested in issues such as how countries like Poland or Russia interact with the International Monetary Fund (IMF) and in how the IMF decided what to ask these countries to do in terms of reform, My senior undergraduate thesis was about how the IMF bargained with Poland and Russia.

What has your career path looked like since graduation?

When I was in graduate school, it was uncommon to do a postdoc, so I got my first job at the University of Notre Dame in 1999. I stayed there for five years, and in 2004 there was an open position at UNC-Chapel Hill. I knew a bit about UNC; while in graduate school, I took a “Time Series” class there with Mike Munger. And I really loved the area! I received tenure at UNC in 2007, and I was promoted to Professor in 2011. UNC was a wonderful place to work, and Chapel Hill was a great place to live.

Being in the area also allowed me to continue my relationship with Duke.  I had the opportunity to co-organize (with Judith Kelley) a long-running interdisciplinary speaker series hosted at Duke. It was initially called “Globalization and Equity.” And I co-authored papers with Eddy Malesky (who also overlapped with me in graduate school) and Erik Wibbels.

How did your time at Duke shape your thinking?

I began my Ph.D. at Duke immediately after undergrad, and, to be honest, it was a big transition from a liberal arts college to a research university. I was a first-generation college student, so I probably did not appreciate what a shift this would be.

At my undergraduate institution, the faculty members were largely focused on teaching; at Duke, the emphasis was on training us to be researchers. So, in graduate school I learned how political scientists understand the world, how to develop theories, and how to test hypotheses. There are two things that made Duke a really special place for me. First, the faculty at Duke always treated graduate students like their future colleagues. They not only helped me develop the skills I needed but also helped me get connected to the profession in very useful ways. Early on, my dissertation advisors invited me to small workshops and made it very easy for me to meet visiting speakers. Second, there was a lot of conversation and community across cohorts. The more senior graduate students were really good at giving more junior students advice on their journey. I shared office space with some fourth- and fifth-year graduate students, and they were all great, always happy to talk about the dissertation process and to give practical advice regarding research and courses.

Another interesting thing about Duke at that time was that there were no strict divisions between subfields. Such distinctions aren’t really useful intellectually anyway; we are motivated by questions, less so by our subfields. People like Peter Lange, Bob Keohane, and John Aldrich reminded us graduate students that the best way for political scientists to understand the world was to come up with overarching questions dealing with big puzzles—and with theories that weren’t limited by subfield boundaries. I still remember taking a graduate seminar called “Internationalization and Domestic Politics” co-taught by Beth Simmons and Peter Lange. They taught this class in 1995, I think. It was there that I first had the idea for my dissertation, even though I wrote a terrible seminar paper! It was in this seminar that I encountered ideas for research that I’ve come back to repeatedly over the last two decades.

What was your most memorable moment at Duke?

I still remember the graduate student workshop that took place every Friday afternoon at 3:30. Each week, graduate students presented their research, and we had the opportunity to meet people from across the department, including both students and faculty members. There was a strong norm that people would come to the workshop regardless of what the presentation was about. People came to share their ideas about what they were working on, and this formed a very constructive intellectual environment. I used to joke that, having never taken a class in American politics in graduate school, everything I knew about American politics was from the workshop. 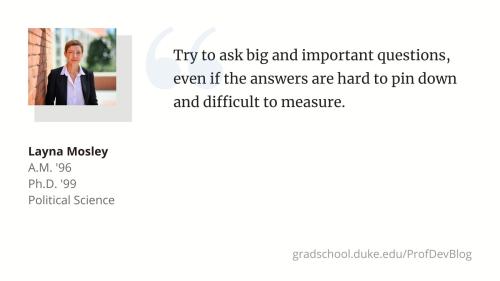 What advice do you have for graduate students hoping to pursue a career in political science?

My first piece of advice is that it is important to keep the networks that you have built during your time in graduate school. Many of the relationships that I have from graduate school remain; my graduate school friends have become great collaborators. One of my co-authors, Sarah Brooks, now at the Ohio State University, was a year behind me. Eddy Malesky, now at Duke, was a few years behind me in the Duke graduate program.

Next, if you want to go into academia, it is important to find a balance in graduate school between learning necessary skills and substance, and creating new work with an aim to publication. There is a lot more pressure to publish before you finish the Ph.D. now than there was in the 1990s. This makes sense, given the academic job market. But graduate school also is a time to learn new skills and to learn about large swaths of academic literature. Once one has a tenure-track job, it’s hard to find time to read broadly and to think about larger questions. Many of us long for the graduate school days, when we seemed to have more time for those things (and fewer administrative responsibilities!).

Finally, try to ask big and important questions, even if the answers are hard to pin down and difficult to measure. 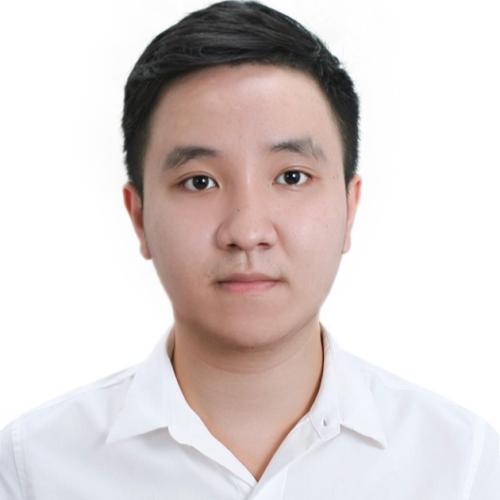 Phuong Pham is a Ph.D. student in Political Science at Duke University. His research mainly focuses on international political economy and security, particularly at the firm level.