Claudio Saunt received his Ph.D. in History from Duke in 1996. He is currently the Richard B. Russell Professor in American History at the University of Georgia, where he also co-directs the Center for Virtual History and serves as the Associate Director for the Institute of Native American Studies. Claudio is the author of four books, which have received the Southern Historical Association’s Charles S. Snydor Award for the best book on Southern History, the American Society for Ethnohistory’s Wheeler-Vogelin Award for the best book in ethnohistory, and the Harry M. Ward Prize for best book on the American Revolution, among other prizes. Follow Claudio on Twitter @ClaudioSaunt.

We met at the end of February at The Common Wind Symposium, which honored the writing and teaching of Julius S. Scott. How did Dr. Scott influence your work?

He’s just an extraordinary person, and he’s a lot of fun to talk to in all kinds of ways. When I first arrived at Duke, I planned to study Renaissance history before switching to twentieth-century American history in my first semester. Soon after that, because of working with both Peter Wood and Julius, I was pulled back to the eighteenth century. In part, this change was thanks to Julius, who opened a window onto the amazingly diverse Atlantic World. I grew up on the West coast, so I was never interested in the traditional narrative of early American history that was rooted in New England. In addition, I wanted to work in a language other than English. Julius pointed me to the rich Spanish language archives and to the Caribbean basin, and so my initial research in graduate school was focused on Florida, which is intricately tied to events in the Caribbean.

What is one of your favorite memories of graduate school at Duke?

One of my favorite memories is actually with Julius. I did a directed reading with Julius and there were three of us is in that reading: Stephanie Smallwood and Alex Byrd. We used to meet outside the West Duke building, and I remember sitting on the steps, the three of us with Julius, talking about eighteenth-century Atlantic history. It was just a great experience to have Julius, who was a pioneer in that field, and the three of us, who were each interested in different components of that field, but who all wanted to move it forward in our own ways.

What has your career path looked like since graduating Duke?

My first year out of graduate school I received a two-year Mellon postdoc at Columbia, and from there I got a job at the University of Georgia, where I still work.

I love it. I especially love teaching a diverse group of undergraduates. When I say diverse, it should be noted that UGA is not as diverse as it ought to be in terms of race, and that’s been an ongoing problem. When I speak about diversity in this instance, it's referring to the number of students who are first-generation and for whom going to college is a real privilege. I have the chance to expose them to ideas that they really have not had the opportunity to think about, and some of them are truly excited about it. Because my most recent book, Unworthy Republic: The Dispossession of Native Americans and the Road to Indian Territory, is on Indian removal, I am now focusing my teaching a little bit more on the Southeast and on Georgia’s role in Indian removal. That is still a charged issue for students. A lot of them don't know much about it, but they do have a sense that Georgia was central to this event. They do have a desire, then, to know more about it, and inevitably, there's always a student or two who will come up to me after class and say, you know, my great-great-great-grandfather won this land in the Cherokee land lottery. That’s not really an uncommon occurrence in Georgia, so it’s a personal connection they make to the seemingly distant past.

Speaking of your work, what made you decide to write a new account of Indian removal?

When I was finishing up my last book, I inherited a collection of papers from my grandfather, who was a refugee from Hungary. He came to the United States in 1938, and he kept up correspondence with his family and his parents and his brother and sister who remained in Hungary. Hungarian Jews were the last to be deported in the spring of 1944, so the correspondence continues until 1943. It’s just this incredible window onto the experience of Jews in Hungary during this period of crisis. His family was all killed in Auschwitz, but the correspondence picks up in 1945 with survivors from his village. The correspondence really inspired me to take another look at the deportation that occurred closer to my current home in Athens, Georgia: Indian removal.

I was unsatisfied with the existing literature on the subject, which I think emphasizes the tragedy of the story above all else. Of course it is a tragic story, but there are lots of other angles, and I was especially interested in the role of the state in the administration of deportation. I also wanted to get away from some of the stereotypical language that we use to talk about Indian removal, starting with the term Indian removal itself, since that term was coined by proponents of the policy. Indian removal is an odd construction because it's not really clear who is doing the removing. People who opposed it at the time, like the Principal Chief of the Cherokee Nation John Ross, often called it an expulsion. In the book I call it an expulsion and also a deportation. The problem with that is that the United States cannot deport people in a different country. The United States cannot deport Mexicans from Mexico; they can extradite Mexicans, but they can’t deport them, so the term raises the question of indigenous sovereignty. I do use deportation because I think it encapsulates the state administration of the process, and it also captures the efforts of the United States to impose and infringe on indigenous sovereignty in the 1830s.

I think it’s a really interesting question because, though you would think it's just a matter of language. The difficulty of finding a fitting word really reveals the contradictions in the U.S. legal system and the conflicts of sovereignty that existed.

Right, and the other thing it raises is the connection of this event to later deportations. In the introduction, I suggest that there are these connections. Notoriously, Hitler referred to and admired U.S. Indian policy and at one point said that the Volga River would be Germany’s Mississippi – that Germany would be expelling eastern Europeans, non-Aryans, across the Volga. Now these administrators later on did not know the details of U.S. Indian policy, but I think it's suggestive, nonetheless, that they drew these connections. It suggests that U.S. policy in the 1830s was among the first mass deportations in the modern era.

Do you have any other interesting projects or plans in the works?

Right now, I am working on a long-standing digital project to map the population of early America decade by decade from 1500 to 1800. It will show the African, Indigenous, and European populations, and allow people to zoom in and out and to define sections of the map to return population counts. I received an NEH grant to finish it, and it will be launched in the spring of 2021.

I have seen your other digital projects, so I look forward to seeing this one. What is the best career advice you have received, and how has it helped you navigate higher education?

The best advice I received was from Peter Wood, my mentor, who told me to keep my head down and do my work. There are distractions within the individual fields that we work in and then there are inevitably administrative distractions. But, keep your head down and do your work and put that and your teaching first.

To close, I want to ask whether there is any advice that you would like to share with current graduate students at Duke.

I think that Duke graduate students are coming out of a great program. I'm going to say don't get caught up in the passing debates in the field. In other words, try to think originally about your subjects. You do need to be informed of the historiography, but I think it can kind of tamp down on our creativity when we get pulled too deeply into the debate of the moment. I always recall a Miles Davis quote in which he says if he had to do it all over again, he would not listen to any music. Now that’s preposterous, but his larger point is once you’ve learned the clichés, it’s hard to forget them. If you want to do something truly original, you need to keep your distance. 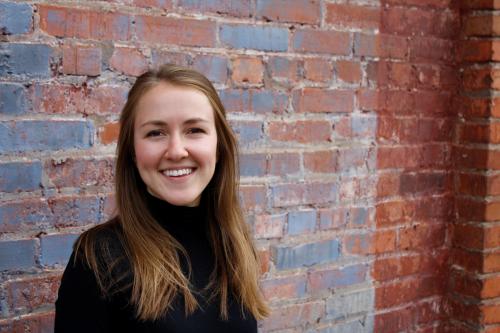 Vivien Rendleman is a Ph.D. student in the Department of History and a James B. Duke Fellow at Duke. She studies the history of the nineteenth-century United States, colonialism, and slavery. She is working on a dissertation project about the Upper Mississippi River Valley, where geography, law, and social practice came together to create a system of unfree labor distinct from the slave system to its south.