In May, a graduate student at UCLA was accused of fabricating data for a highly publicized study. In the fallout, the journal Science retracted the paper, the student lost a prized job offer, and the incident renewed discussions about the system of journal review and publication.

Headline-grabbing fabrication of data, however, tends to be the exception in the realm of research misconduct. Most cases attract less attention, are less clear-cut, and may not even be intentional, but they can nonetheless damage researchers’ careers.

“Often it’s sloppiness in note-taking or attempts to cut corners,” says Hugh Crumley, assistant dean for academic affairs at The Graduate School. “There are a lot of gray areas.” [Take our quiz and see how well you know your research ethics] 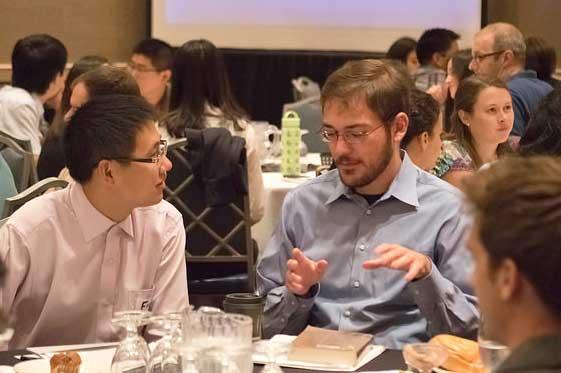 Students discuss research ethics during RCR orientation. One thing that makes The Graduate School's RCR training stand out is that all the sessions are face-to-face rather than online.

Since 1994, The Graduate School has been helping students navigate those gray areas through its Responsible Conduct of Research (RCR) program. Initially, only Ph.D. students in departments that received funding from the National Institutes of Health were required to participate in RCR training, but the school has gradually expanded that requirement to encompass all of its Ph.D. and master’s students.

The training begins as soon as students arrive at Duke. A four-hour session is a mandatory part of orientation week for the school’s new master’s students. Ph.D. students have to complete up to 18 hours of RCR training during their first four years, beginning at orientation.

The school’s RCR program covers 12 topics, such as plagiarism, conflicts of interest, copyright, and data management. While some institutions provide this training through online modules, The Graduate School’s sessions are all in-person, which allows students to have face-to-face discussions with faculty and professionals about the sometimes murky waters of research misconduct.

Crumley, who oversees RCR training at The Graduate School, says the in-person approach makes the school’s program stand out. In fact, other universities have been looking to emulate elements from the school’s model.

“Our mindset is that RCR training isn’t just about compliance,” Crumley says. “We see it as an integral part of a comprehensive graduate education.”