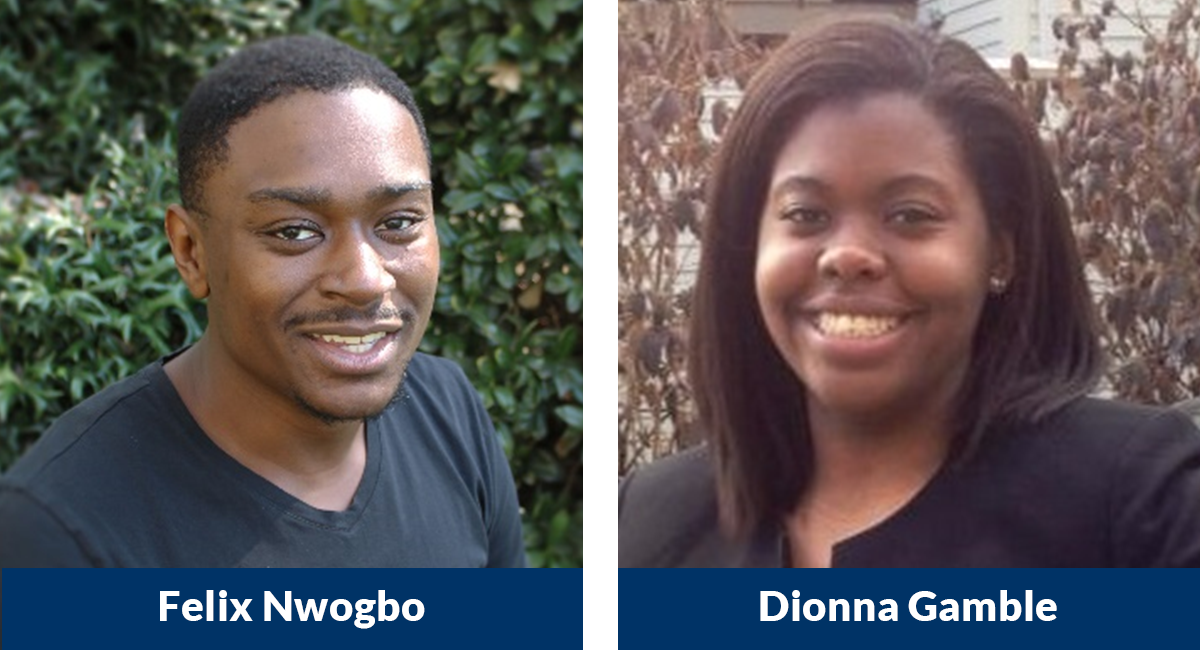 Ph.D. candidates Dionna Gamble and Felix Nwogbo have been named recipients of the 2019 Samuel DuBois Cook Society Awards, which recognize individuals who routinely enrich the lives of people in the Duke community and contribute to the betterment of all people, above and beyond their given roles.

Gamble is a doctoral candidate in the University Program in Genetics and Genomics, while Nwogbo is in the chemistry Ph.D. program and recently defended his dissertation. Both came to Duke after earning bachelor’s degrees from the University of Maryland, Baltimore County.

The Graduate School nominated Gamble and Nwogbo for the Cook Society Awards for their contributions toward efforts to make Duke more diverse and inclusive. They served as co-presidents of the Duke Bouchet Society, which primarily supports graduate students from underrepresented groups in the natural sciences, technology, engineering and math. In that role, they led successful initiatives to raise the funds needed to continue the Ida Stephens Owens Dinner, an annual black-tie event that began in 2013 in honor of the first African American woman to receive a Ph.D. from Duke.

The Ida Stephens Owens Dinner typically draws more than 100 attendees and requires substantial funding and planning. In 2016, Gamble and Nwogbo developed strategies that raised enough support to host the event at the Searle Center. The next year, they spearheaded efforts that engaged sponsors across Duke to raise more than $11,000 (exceeding their goal of $10,000) for the dinner, which also commemorated 50 years of Black students at Duke and drew about 200 attendees.

Gamble and Nwogbo also helped The Graduate School secure a $1 million grant from the Alfred P. Sloan Foundation in 2017 to help recruit and support more Ph.D. students from underrepresented minorities in engineering and the physical sciences. They served on the site visit committee, which played a key role in the Sloan Foundation’s evaluation of Duke’s proposal. The resulting grant is funding the University Center of Exemplary Mentoring, which recruited its first cohort of Sloan Scholars this year.

Gamble and Nwogbo will receive their Cook Society Awards on February 19 at the annual dinner and award ceremony at the Washington Duke Inn.

The Samuel DuBois Cook Society was founded in spring 1997 to honor Cook, the late Duke professor who was the first African American professor to hold a regular faculty appointment at a predominantly white college or university in the South. The society recognizes the years of service he offered to Duke, to the cause of African American advancement, and to the betterment of relations between people of all backgrounds.