When she was a college senior, Tomiko Brown-Nagin faced a choice: law school or graduate school. One pointed toward the career she aspired to while growing up; the other would allow her to pursue a newfound passion.

As it turned out, she didn’t have to choose. Brown-Nagin, a first-generation college student, ended up earning a history Ph.D. from Duke and a law degree from Yale. She has combined both interests to build a career as a leading legal scholar and historian. She is also an award-winning author of books on civil rights, including a timely biography of the first Black woman to serve as federal judge.

For her accomplishments, The Graduate School has named Brown-Nagin the 2022 recipient of its Distinguished Alumni Award. She will be recognized at the school’s Ph.D. Hooding Ceremony on May 7.

“Now I feel so very fortunate that I pursued both interests!” Brown-Nagin said when she reflected on her career in a 2019 interview. “It wasn’t easy to do. Many people discouraged me. I was told by so many people: ‘You can’t do both; you have to choose this modality of scholarship or that one.’ I rejected that false choice. I designed and pursued a Ph.D./J.D. between two different institutions at a time when that was not at all common. But that experience, and the joy that I’ve had pursuing both law and history, explains why I’m here.”

“One of the Best Times of My Life”

Growing up, Brown-Nagin wanted to become a civil rights lawyer, a goal borne out of her childhood in upstate South Carolina in the years after the passage of the Civil Rights Act. Yet, her undergraduate experience at Furman kindled an interest in history and research, which pointed her toward graduate school.

She was accepted to both the Duke Ph.D. program in history and Yale Law School. The Duke offer came with a Duke Endowment Fellowship (now the Dean's Graduate Fellowship) and a James B. Duke Fellowship, which she said made her decision “inevitable.” She deferred her law school admission and came to Durham to begin her Ph.D. work.

“Duke really wanted me to attend and was uniquely committed to my education,” said Brown-Nagin, who has in turn supported graduate education at Duke through her service on the Graduate School Board of Visitors and the establishment of a fellowship to support Ph.D. students in the humanities and social sciences. “My time at The Graduate School ended up being one of the best times of my life. Because of the fellowship’s support, I had extended time to read, think, and write.”

At Duke, Brown-Nagin studied under the tutelage of William Chafe. She credits him for teaching her the methods of a social historian, an appreciation for the role of place in history, and the importance of grassroots historical actors. He also influenced her perspective on mentoring students.

“Bill taught me that one could maintain one’s humanity even as one moved up in the academic hierarchy,” Brown-Nagin said in a recent conversation with Duke graduate students. “He was one of the kindest people I have ever met, and partly because of the example that he set, I now aspire to show my students the same kindness that he showed me.”

After one year at Duke, Brown-Nagin completed her master’s and began her law degree at Yale.

“There I realized that law school was compatible with the kind of intellectual work that I was doing at Duke,” she said. “And ultimately, I figured out that I didn’t actually have to make a choice, that I could pursue my long-standing commitment to law and equality, and also pursue this relatively late-breaking interest in archival research, in digging into the past in order to try to make sense of the present.”

She finished her law degree in 1997 and her Duke Ph.D. in 2002. During that time, she also clerked at a U.S. District Court and a U.S. Court of Appeals, and worked as a litigator at Paul, Weiss, Rifkind, Wharton & Garrison before turning to academia full-time. She served on the law and history faculty at the University of Virginia before moving to Harvard in 2012.

She is now the Daniel P.S. Paul Professor of Constitutional Law and a professor of history at Harvard. In 2018, Brown-Nagin was appointed dean of the Radcliffe Institute for Advanced Study. The following year, she became chair of the Presidential Committee on Harvard and the Legacy of Slavery.

Brown-Nagin has received an impressive list of accolades: a fellow of the American Bar Foundation, a distinguished lecturer for the Organization of American Historians, and a member in the American Academy of Arts and Sciences, the American Law Institute, and the American Philosophical Society, just to name a few.

She has published articles and book chapters on many topics, such as the Supreme Court’s equal protection jurisprudence, civil rights law and history, the Affordable Care Act, and education reform. She is a frequent lecturer and media commentator, and she has collaborated with the city of Atlanta and the National Center for Civil and Human Rights on projects to memorialize the history of the civil rights movement.

Brown-Nagin has written extensively about the fight for civil rights. Her 2011 book, Courage to Dissent: Atlanta and the Long History of the Civil Rights Movement, won six awards, including the Bancroft Prize in U.S. History. 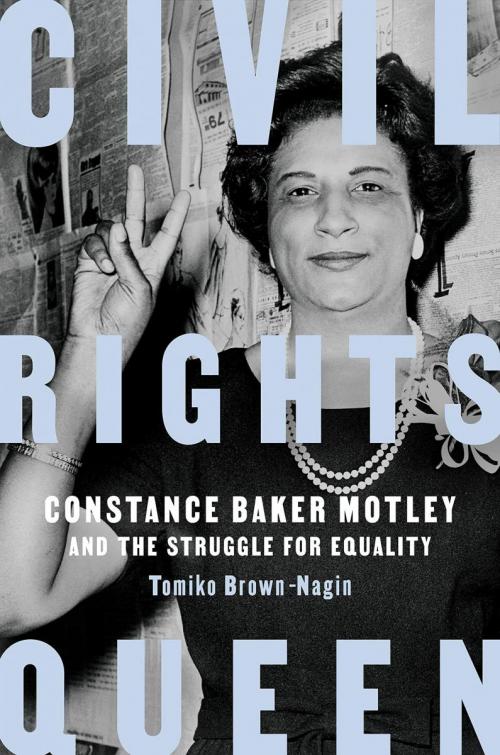 That work also planted the seed for her latest book, Civil Rights Queen: Constance Baker Motley and the Struggle for Equality, a biography of the first African American woman to serve as a federal judge.

Before stepping into that historic role in 1966, Motley made key contributions to numerous civil rights legal battles. She was a front-line lawyer for the NAACP Legal Defense and Educational Fund, assisting future Supreme Court Justice Thurgood Marshall. She was the first Black woman to argue a case before the Supreme Court. She was the only woman on the NAACP legal team for Brown v. Board of Education of Topeka, writing the original complaint in the landmark case that struck down segregation in public schools. She led litigation that desegregated the Universities of Georgia, Alabama, and Mississippi.

Yet, when Brown-Nagin dug into Motley’s litigation work on school desegregation in Atlanta for her 2011 book, she discovered that Motley’s role in history had been largely overlooked by historians.

“Motley litigated the Atlanta desegregation case all the way to the Supreme Court,” Brown-Nagin told the Washington Post. “In seeking to draw readers into a discussion of a court case, I wrote a biographical sketch of Motley, during which time I realized there was relatively little scholarly engagement with her legacy and her achievements, and I wanted to correct the historical record.”

Her biography of Motley was published in January 2022—perfect timing for bringing renewed attention to the trailblazer as Ketanji Brown Jackson recently became the first Black woman to serve as a U.S. Supreme Court justice. The historic moment and the pushback against it during the confirmation process have shined a new spotlight on Motley, one of Jackson’s role models.

“Motley was and is inspiring,” Brown-Nagin said, “and one of the reasons that I wanted to write this book and claim her rightful position in history is precisely because of the importance of visible diversity for all of the people for whom she stood in—women, immigrants, African Americans, the working class.”