Inclusion in Science: “Nothing Less than Our Relevance as A Community” Is at Stake

The following is the text of remarks given by Francisco Ramos, Ph.D., The Graduate School's manager of program evaluation and assessment. Ramos was speaking at a November 16, 2016, panel on gender and implicit bias in STEM, hosted by Women in Science and Engineering at Duke.

When I was originally putting together my notes, I was thinking about how I could stimulate a discussion about the many ways implicit bias affects the people we know, the labs we work in, and the community we are trying to build. However, I am struggling today because the world has changed so much since I received the invitation.

Let me be clear: Racism, sexism, discrimination, and bigotry have no place in our community. That is not who we are.

I want to begin by saying that diversity and inclusion are at the heart of who we are as a scientific community, as a university, and as a country. Science is at its best when everyone has the equal opportunity to learn, contribute, and constructively engage with one another. In the United States, there is a very real debate taking place, right now, about the role and importance of science and knowledge in society. There are a lot of people who think that what we do is not applicable to everyday life. Frighteningly, there are a lot of people in influential spaces who deny the scientific knowledge that supports our understanding of evolution and climate change.

I am here to say that ideas matter, that research matters, how we treat each other as fellow human beings matters, how we communicate to the broader public matters, and how we build our scientific community matters. We have to be smart. We have to be brave enough to struggle for what we believe in. We have to do it together. What is at stake, right now, in this moment, is nothing less than our relevance as a community and the possibility of forfeiting the hard-fought knowledge, its application, and the progress we’ve made.

I would like to put forward two claims which, I believe, do not receive as much attention as they deserve. First, diversity and inclusion are central to science itself. This year, at the highest realms of the scientific research community, there were six Americans who were awarded a Nobel Prize in the fields of chemistry, physics, and economics. What you probably don’t realize is that all six Americans are immigrants.

Second, diversity and inclusion are central to how we construct knowledge. Who is in the classroom and research lab matters because they carry with them a unique set of experiences, skills, and knowledge that no one can learn or acquire on their own. Simply stated, by excluding others, we are harming and depriving ourselves of what we one day might become. In your everyday lives, you are surrounded by some of the brightest minds in the world, studying in one of the finest universities in the country. The idea that not everyone can participate in the knowledge-construction process because of who they are, the color of their skin, their country or origin, or how they identify flies in the face of the most fundamental tenet of what we’re trying to achieve—that everyone is created equal and has something to contribute.

If there is one thing you take away from what I am telling you, it is this: If we divorce knowledge from action, we may fall into the trap of reproducing the kind of conditions we are attempting to transform. 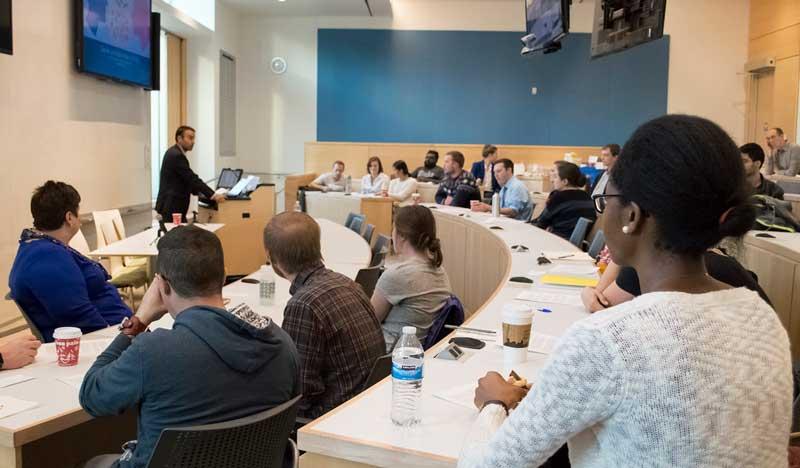