Graduate School Honors Owens with Documentary about Her Experience

In 1967, Ida Stephens Owens became the first African American woman to receive a doctorate from Duke University. On March 25, 2014, The Graduate School honored Owens with the premiere screening of a documentary about her life and work, followed by a panel discussion about the role that graduate and professional schools played in the desegregation of higher education. 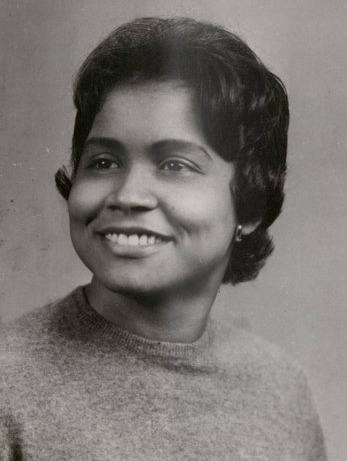 Owens started her graduate study at Duke in fall 1962 after spending the previous summer doing research in Tosteson’s lab. Under the mentorship of Dr. Jacob J. Blum, James B. Duke Professor Emeritus of Cell Biology, Owens received her PhD in physiology in 1967, becoming the first African American woman to receive a doctorate from Duke. As part of Duke’s Sesquicentennial Celebration, Owens, along with eleven other women pioneers in their fields, was recognized in Portraits of Women Firsts, a collection curated by the Duke Women’s Studies Program.

After postdoctoral training at the National Institutes of Health, Owens established a highly regarded research lab. In 1975, she initiated a research program to investigate a drug-detoxifying system that is now recognized for its studies on the genetics of human diseases. In 1981, this research program was extended and made into a permanent Section of Drug Biotransformation, and Owens was named chief. She was the first to determine genetic defects in children with Crigler-Najjar diseases, a rare disorder affecting the m

etabolism of bilirubin, and is recognized throughout the world for her work on drugdetoxifying enzymes. Owens received the NIH Director’s Award in 1992 and presently serves as the head of the Section on Genetic Disorders of Drug Metabolism in the Program on Developmental Endocrinology and Genetics.

In 2013, Owens became the inaugural recipient of The Graduate School Distinguished Alumni Award.

King, University Archivist Emeritus, holds a BA and a PhD in history from Duke University. He launched Duke’s archival program and directed it for thirty years until he retired. In 2005, he received the University Medal for Distinguished and Meritorious Service for "collecting the school’s records, updating its written history, and educating a generation of the university community about the complicated and rich history of the university and the Duke family."

Kotelanski, a lawyer with the US Department of Justice, is a graduate of New York University School of Law and Duke University. He received the Hugh T. Lefler Award from the North Carolina Historical Society for his undergraduate senior honors thesis about the events that resulted in the desegregation of Duke.

McClain is dean of The Duke University Graduate School, a professor of political science, and a professor of public policy. She is the first African American to serve as the dean of one of Duke’s ten schools and the first African American to serve as chair of the university’s Academic Council. A Howard University PhD, her primary research interests are in racial minority group politics.

To learn more about the documentary and the panelists, see the event program (PDF).

Photos from the Screening