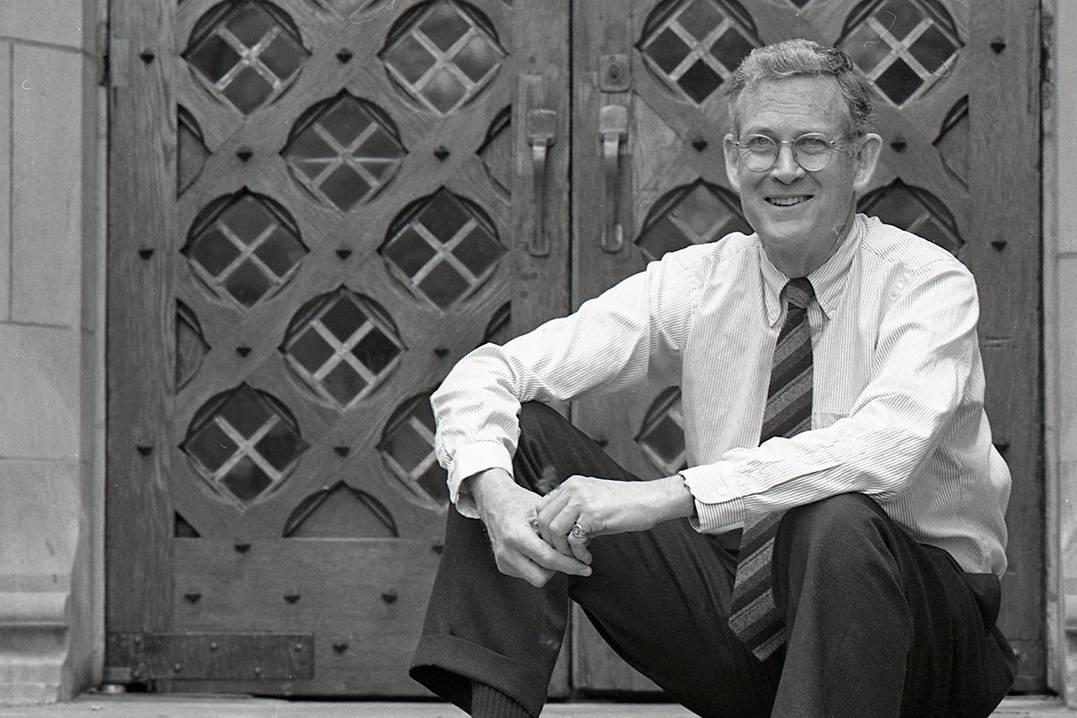 Craufurd Goodwin, a James B. Duke Professor Emeritus of Economics who in more than 50 years at Duke helped shape the university’s course during the strife of the 1960s and made Duke a leader in the study of the history of economic thought and boosted the profile of The Graduate School, died Thursday. He was 82.

Goodwin first arrived at Duke in 1955 as a graduate student in economics, receiving a Ph.D. in 1958 following his thesis on Canadian economic policy. He returned as a visiting assistant professor in 1959-60 and joined the regular-rank economics faculty in 1962.

Over the next five decades, Goodwin held several leadership roles at the university, including vice provost, university secretary and dean of The Graduate School.  In 1969, he was among the faculty members, including Samuel Dubois Cook, who served as key intermediaries between students and the administration during the Allen Building takeover.

His tenure as Graduate School dean saw increased attention on graduate student services and stronger student support. His tenure provided the basis for a “The Academic’s Handbook,” a best-selling guide for graduate students beginning on an academic career. Goodwin co-edited the book with A. Leigh DeNeef, professor emeritus and former associate dean of The Graduate School.

“One thing I will always remember about Professor Goodwin is that we used to pass each other frequently on Abele Quad, and he always had a ready smile and a warm greeting for me,” said Paula McClain, current dean of The Graduate School. “He was a passionate supporter for graduate education at Duke and played an instrumental role in the development of The Graduate School. His passing is a significant loss to the Duke community.”

As an economist, he specialized in the history of economic thought, which is now on the strengths in one of the largest departments in Trinity College. His scholarly work primarily concerned the history of the use of economics in public life.​ His writings encompassed the role of economics in the arts, in literature, in journalism, and in the policy arena and the way institutions such as foundations and think tanks helped shape the nature of economics education and analysis around the world.

“Craufurd was one of a small group of people who started the field of the history of economic thought,” said Paul Dudenhefer, assistant director of the Duke EcoTeach writing program who worked with Goodwin for more than 15 years. “It used to be done as part of economics in general. Through the founding of the journal, he helped make it its own subfield. He institutionalized the subfield of the history of economics.”

Among colleagues, Goodwin made the environment interesting. Dudenhefer said Goodwin “was always eager to talk about the fascinating things he was reading and writing about. Working with him was extremely educational and entertaining. He made me laugh every day.”

A past president and distinguished fellow of the History of Economics Society, Goodwin was instrumental in the construction of the professional community of historians of economics.

He was a popular teacher throughout his time at the university, and taught many students the department’s introduction to microeconomics class. In 2001, he received the Howard D. Johnson Teaching Award for Excellence from Trinity College.

He kept active throughout his emeriti status. In 2014, Harvard University Press published his book study of the economic thought of journalist Walter Lippman, which received strong reviews for shedding light on a little studied aspect of Lippman’s career.

He was married to Nancy Goodwin, herself was a noted writer and gardener. In 1977, the Goodwins moved to Montrose, a 19th century homestead in Hillsborough once owned by a William Alexander Graham, a former North Carolina governor and US senator. It is listed on the National Register of Historic Places.

The house included an exceptional art collection, some of which focused on the British Bloomsbury Group, an informal gathering of artists, writers and intellectuals that included Virginia Woolf, E.M. Forster, John Maynard Keynes and Lytton Strachey. Through the involvement of Keynes, the collection connected Goodwin’s love of art and his interest in economic history. The art was the centerpiece for a 2008 Nasher Museum exhibit on “The Bloomsbury Artists in American Collections."

The house drew visitors from around the country, attracted by its history and the 20 acres of gardens Nancy cultivated at Montrose. The gardens have been nationally recognized by the Garden Conservancy. The Goodwin’s work at Montrose led to a Duke University Press book about the house’s history and its gardens, as well as repeated coverage in the New York Times.